Lawyers and Linkedin - Success Stories, Cautions and a Small Complaint

With all the buzz over social media “darling” networks like Twitter and Facebook, it’s easy to forget the less glossy applications. LinkedIn is far more prosaic than Facebook and, frankly, a lot less fun than Twitter. But because of its business focus and broad business user base, LinkedIn should be a part of any marketing strategy, especially for lawyers. LinkedIn is a good place on which to set your digital footprint. It can help you grow your network, which in turn enables you to find your next job, get advice, establish thought leadership and build your business. Sheer numbers indicate that having a profile on LinkedIn is desirable to lawyers. According to a post in the Stem Legal blog, as of June 2009 there are 840,000 people within the legal profession on LinkedIn, up from 563,000 in March 2009. LinkedIn says that it has 43 million total members in 200 countries and territories all over the world.

Another important reason to be on LinkedIn is: it boosts your personal Search Engine Optimization (SEO). LinkedIn profiles appear high on Google rankings. So, if someone wants to find you and uses Google chances are your LinkedIn profile will pop up close to the top of the first page. The most important thing to know about LinkedIn is that, like other social networking platforms, getting the most out of the network is up to you. You get out of it what you put into it. Just putting up a profile isn’t ever enough. Here are some other things you can do on LinkedIn.

WHAT HAVE YOU DONE WITH IT LATELY? AND, WHAT CAN IT DO FOR YOU?

Tyson Snow, an attorney at Manning Curtis Bradshaw & Bednar, LLC, does not consider himself to be the foremost authority for legal issues on LinkedIn, but according to his peers in two law-related groups on the Web site, he is the #1 expert.

Snow didn’t achieve his lofty status by being quoted in the major legal trades, arguing groundbreaking cases before important courts or writing a highly-regarded book about the law. The 31-year-old lawyer established his credibility by thoughtfully, consistently and strategically answering questions posed by users of LinkedIn.

“LinkedIn has helped me create a presence and name recognition in town as an employment and commercial litigator,” says Snow. Snow said that he has not generated new business directly from LinkedIn, but acknowledges that he is making valuable connections from the site.

How Snow became the most highly ranked expert on employment-law related issues on LinkedIn, and how he uses the Web site to expand his business network provide a roadmap for legal professionals just joining or even for those who have a presence that’s been laying fallow for a while.

WHEN WAS THE LAST TIME YOU UPDATED YOUR PROFILE? 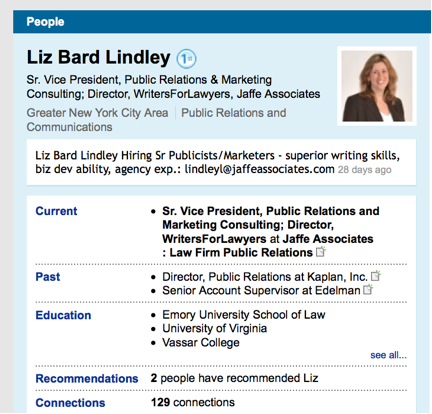 If you’re not already on LinkedIn create a profile. If you created a profile hastily last year and haven’t been back to the site since, now is a good time to revisit it. Chances are your profile has been viewed by other people, especially if you have been job hunting or provided a reference for someone on LinkedIn who is also job hunting. A recent poll conducted by Jump Start Social Media found that 75% of hiring managers from all size firms check candidates’ credentials on LinkedIn.

When you update your profile, spend extra time in positioning yourself. Don’t begin and end with your job title. The profile format on LinkedIn may look like a resume but it’s more generous. You can highlight and editorialize your achievements easily. Your profile should include a professional headshot, and a clean and clear “positioning statement” about who you are and what you do in your “headline.”

Once you’ve created a robust profile, make a plan to keep it up to date. LinkedIn enables you to include links to articles you’ve written, presentations you’ve given, your firm’s Web site, your blog and news about important cases you’ve won. Keeping your profile up to date can help to keep you top of mind with your connections because they will be notified when you make major changes in your profile.

As you enrich your profile, beware of embellishment. Recently, the American Bar Association held a CLE Webcast, Ethical Implications of Marketing in a Web 2.0 World. As reported on the Lawyerist blog, the seminar speakers admonished lawyers to be aware of their states’ legal marketing rules, as they may apply to activity on LinkedIn and other social networks. According to the blog post, the CLE speakers said to “make sure that you’re not saying anything on LinkedIn in your personal or company profile that you wouldn’t say on your Web site.”

MAKING CONNECTIONS – OR NOT

When building up connections on LinkedIn, the Web site says that quality counts over quantity. After all, the purpose of having a network is to use it to make connections that matter. Your connections are directly linked to your personal brand.

However, there are a number of people on LinkedIn who eschew this point of view and cast as wide a connection net as possible. They call themselves LIONS. A LION is a LinkedIn Open Networker. Richard Krasney, a wealth manager in the New York City metro area is a LION who says that his open-networking philosophy has reaped enormous benefits, including client referrals. “I looked at LIONS as connectors, and I saw that there was a lot of value in being a connector on LinkedIn and having lots of experts at my fingertips,” he said.

Whether you adopt LinkedIn’s suggested approach to connecting, or that of the LIONS (which runs counter to the LinkedIn use policy), the most important thing to do with a network is to use it to achieve your goals. Whether you use LinkedIn to help a former colleague with her job search, or ask one of your connections to introduce you to someone, your connections aren’t just a virtual, semi-public Rolodex. Your connections are useful: they are people who can help you meet others (and vice versa).

JOINING THE RIGHT GROUPS – AND USING THEM

There are thousands of groups on LinkedIn and it’s not easy to figure out which ones to join. Under “legal and law” alone, there are over 450 groups. Keep in mind that the size of the group is not necessarily an indication of its value to you.

A good rule of thumb is to start with your practice area. Then check out which groups your colleagues have joined. If you find that a group discussion isn’t useful to you, you can deselect it and thus opt out of the group. An easy way to assess whether or not the group is talking about anything worthwhile, elect to have an RSS feed of the group’s activities sent to your e-mail. You can keep tabs on group activities without having to return to LinkedIn. 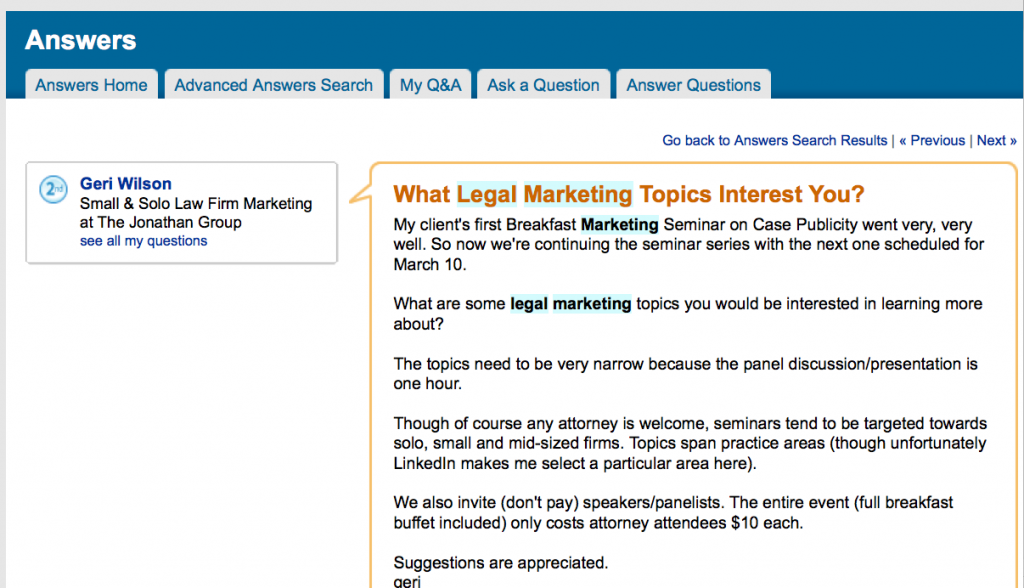 As attorney Snow has proven, getting involved in groups on LinkedIn is an effective way to position yourself as a thought leader by answering questions. Snow rose to #1 because group members vote on answers that they find to be most useful. Snow posts answers once or twice weekly. He believes that his answers are useful be- cause he just doesn’t dash off top-of-his-head answers to questions. Instead, he takes time and consideration prior to answering questions and says he spends about ten minutes crafting his response on top of potential additional research.

Another advantage to answering questions is that the question section of LinkedIn is a place to mark your digital footprint and to send readers back to your Web site or blog, if you’ve got one. Make it a habit to include links to both at the end of each answer to ensure maximum possible exposure.

YOUR REFERENCES – AND THEIRS

One of the nice features of LinkedIn is that you can ask business associates to write you references that will be included in your profile. And you, in turn, can give references to them. It’s a public display of affection that can be extremely helpful in adding to your credibility and your professional profile.

However, rules regulating lawyer marketing apply to references (testimonials, in legal speak). The speakers in the recent CLE seminar noted above warned that “testimonials on LinkedIn are permissible, so long as you don’t make – or permit others to make – false or misleading statements in recommendations, or participate in the tit-for-tat I recommend you, you recommend me game, since thatwould likely violate Model Rule 7.2 by offering value in exchange for a recommendation.”

There is another factor to consider regarding recommendations on LinkedIn. A recent article in the National Law Journal warned that glowing recommendations can get employers in trouble because, the article notes, “the employers risk having the recommendations used against them in a discrimination or harassment suit.” Digital trails, including those recommendations found on LinkedIn, Facebook profiles, Twitter feeds and plain old e-mail exchanges are being mined by attorneys for evidence and this practice is likely to increase as more people interact online.

Use common sense when leaving a recommendation: only recommend people you know, have worked with and whom you trust.

SO, HOW MUCH TIME IS IT GOING TO TAKE TO MAKE THE MOST OF LINKEDIN?

As we’ve established, LinkedIn can be an incredibly useful tool for lawyers. But active users complain that it has its flaws. Mining data can be difficult on the site, and it’s maddeningly difficult to navigate because its design is rather inelegant. That means that working your way around the site can eat up time.

It makes sense to take the time to learn how to use LinkedIn. Once you do, your visits will become much more efficient. Once you update your profile, which will likely take the most time, plan to check back three times weekly, spending ten minutes or less per visit. Set a series of tasks: either add to your list of contacts, ask a question, invite people you just met to join your network, recommend someone or take the time to answer a question to further your thought leadership. Your activity should start reaping results.

OTHER SOCIAL NETWORKS FOR LAWYERS AND LEGAL PROFESSIONALS ONLY

While LinkedIn is the biggest professional network, there are specialized legal networks that have a toehold in the social networking space. Their membership numbers don’t rival LinkedIn, and the activity on these sites tends to be slower than that on LinkedIn, but social networking is a niche game. One of these communities may deliver the information and connections that you and your firm need to achieve your goals.

• Martindale-Hubbell Connected has over 11,000 members. Currently, there is a lot of information on social media-related issues.

• Legal OnRamp has over 9,000 members; the site is designed for in-house counsel to connect with one another.

• LegallyMinded, sponsored by the ABA, has 2,000 members; the site contains profiles, and not a lot of other activity.

• LawLink, one of the first social networks for the Legal community, has 5,000 members and now posts Tweets from members on the site.

• HubStreet, a newly launched networking site for attorneys, accountants and lenders/bankers, is still in the BETA testing phase.

LINKEDIN IN A FLASH:

To learn more about all the tools that are available on LinkedIn, go to http://learn.linkedin.com/

To read a simple step-by-step guide on “how-to” LinkedIn, check out Neen James’ article, from The Legal Intelligencer, “Learn How to Use LinkedIn to Build Business.”

Jaffe has assembled a team of highly skilled, senior marketing, PR and creative consultants to help our clients reach their peak potential. Our staff is a diverse blend of talent and backgrounds that includes former law firm CMOs, journalists and Fortune 500 professionals. Together, we embody a unique merit-based culture where every individual has the opportunity to lead and support in a team environment. We’re able to be as collaborative as we are thanks to our mutual respect for one another and our shared drive to be the best.