Nasdaq Proposal to Adopt Listing Rules Related to Board Diversity

On December 1, 2020, Nasdaq filed with the Securities and Exchange Commission (SEC) a proposal to adopt new listing rules related to board diversity.  If approved, the new listing rules would require Nasdaq-listed companies, subject to certain exceptions, to (1) have, or explain why they do not have, at least two diverse directors, and (2) to provide statistical information on the company’s board of directors related to a director’s self-identified gender, race and self-identification as LGBTQ+.  Nasdaq stated that the goal of the proposed listing rules is to provide stakeholders with a better understanding of a company’s current board composition and enhance investor confidence that Nasdaq-listed companies are considering diversity in the context of selecting directors.

The proposed rules would require each Nasdaq-listed company to either (1) have at least two diverse directors, including one director who self-identifies as female and one director who self-identifies as an underrepresented minority or LGBTQ+, or (2) disclose in the proxy statement or information statement for its annual meeting of shareholders, or on its website, that the Nasdaq requirement applies to the company, and provide an explanation of why the company does not have the requisite number of diverse directors.  If the company provided such disclosure on its website, it would be required to also notify Nasdaq of the location where the information was available by submitting the URL link through the Nasdaq Listing Center no later than 15 calendar days after its annual shareholder meeting.

Smaller reporting companies would be permitted to satisfy the board composition requirement by having two female directors, rather than one female director and one director who self-identifies as either an underrepresented minority or LGBTQ+.  If a company chose to satisfy the requirement by explaining why it did not have two diverse directors, Nasdaq would not assess the substance of the company’s explanation but would verify that the company had provided one.

The proposed rules define “diverse” as including individuals who self-identify as female, as an underrepresented minority or as LGBTQ+.

If a company did not have at least two diverse directors and failed provide the necessary disclosure, Nasdaq would notify the company that it was not in compliance with a listing requirement.  The company would have until the latter of its next annual shareholder meeting or 180 days from the event that caused the deficiency to cure the deficiency.  If the company did not regain compliance within the applicable cure period, it could be subject to delisting.

Under the proposed rules, Nasdaq-listed companies would be required to publicly disclose, on an annual basis, diversity statistics regarding their boards of directors.  Companies would be required to provide this disclosure in either the proxy statement or information statement for their annual meetings of shareholders, or on their website.  If a company elected to post the disclosure on its website, it would also need to submit such disclosure along with a URL link to the information through the Nasdaq Listing Center within 15 calendar days of the company’s annual shareholder meeting.

Each company would be required to provide its board-level diversity data in a format substantially similar to the example Board Diversity Matrix included in the proposal. 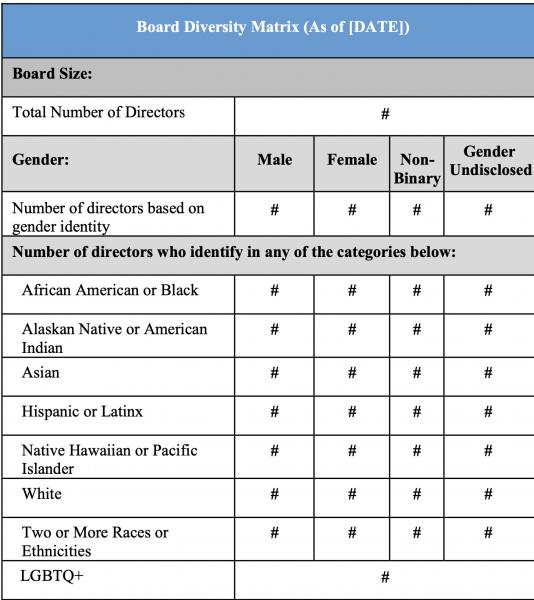 Billy Rohrlich is a shareholder in the firm’s Corporate, Securities/Mergers & Acquisitions Practice Group. Billy has extensive experience in representing both public and private companies in connection with merger transactions, purchasing and selling assets of a business or division, acquisitions of stock and other equity interests of an entity, reorganizations, and other business combination transactions.  He devotes a substantial part of his practice to representing issuers, venture capital firms and other investors with respect to a wide-range of securities...