All U.S. entities and persons must now screen assets and counterparties for relationships to the decentralized smart contract Tornado.cash to comply with the U.S. Department of Treasury requirements relating to blocked persons.

In its press release, OFAC noted that Tornado Cash, like other digital asset and virtual currency mixers, operates on the Ethereum blockchain and facilitates anonymous transactions by obfuscating transaction and asset origin, destination, and counterparties. By receiving a variety of transactions and mixing them together before transmitting funds to an individual recipient, a mixer essentially increases the difficulty of associating a particular person, group, activity, or proceeds with certain assets. OFAC regulators noted that Tornado Cash had been used to launder more than $7 billion worth of virtual currency since the mixer’s creation in 2019.

As part of its enforcement efforts, OFAC publishes a list of individuals and companies, such as individuals or organizations supporting an oppressive regime, hackers, terrorists and narcotics traffickers with whom U.S. persons and companies cannot, by law, transact. These individuals and companies are called "Specially Designated Nationals" or "SDNs." Their assets are blocked and U.S. persons are generally prohibited from dealing with them. By adding the Tornado Cash smart contract, and its associated addresses to the SDN list, OFAC has essentially made it illegal for any U.S. person or company, including financial institutions, to partake in transactions involving the associated addresses and smart contract. The OFAC SDN Tornado Cash list entry also serves to prohibit U.S. persons and companies, including financial institutions and regulated financial intermediaries, from dealing with Tornado.cash related entities, businesses, and persons.

One Twitter user, claiming to tweet on behalf of Tornado.cash, took to the social media site Aug. 9 to alert others on the platform that all the Tornado Cash resources have been banned in relation to the OFAC SDN pronouncement. 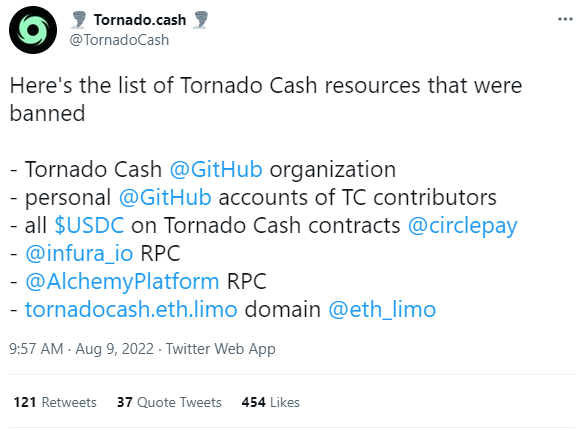 Like other SDN list updates, these changes put financial institutions and financial technology providers serving the digital asset space on notice that Tornado Cash related transactions should be considered prohibited. Digital asset platforms and financial institutions that transact with digital asset addresses will now need to screen for assets, addresses, and interactions with the Tornado Cash smart contract to ensure they are in compliance with their OFAC, Bank Secrecy Act (BSA) and anti-money laundering requirements.

Following the spring 2022 blockchain analytics notice by the New York Department of Financial Services (DFS) and requirements by other regulatory bodies concerning the implementation of Know Your Transaction (KYT) blockchain screening for OFAC and BSA compliance, digital asset related businesses and platforms are required to screen their incoming and outgoing counterparties and assets for relationships with SDN listed individuals, groups and institutions. All U.S. entities and persons must now screen assets and counterparties for relationships to a decentralized smart contract.

Following the identification of wallet addresses relating to the mixer Blender.io in May 2022, OFAC’s designation of Tornado Cash as an SDN reflects the continued trend of increased regulatory scrutiny and oversight into digital assets, providers, and products. Digital asset and virtual currency market participants are now on notice that the decentralized nature of certain smart contracts does not prevent these smart contracts and their related addresses from being identified and blocked by the U.S. Department of the Treasury.

Trace Schmeltz is a partner in the Chicago office of Barnes & Thornburg LLP, where he is the co-chair of the firm’s Financial, Corporate Governance, and M&A Litigation Group and a member of the White Collar Crime Defense Practice Group. A trial attorney with experience in numerous forums including the Delaware Court of Chancery, he concentrates his practice on securities, commodities, mergers and acquisitions and white collar criminal litigation. In addition, he has pursued and defended claims on behalf of auditors, investment banks, corporate boards and corporations....

Katerina (Katie) Mills assists with a range of financial services and digital asset regulatory matters, transactions, compliance, and licensure. Knowledgeable and driven, Katie works collaboratively with her colleagues and clients to find flexible and comprehensive solutions to meet clients’ needs.