PurseN is the owner of record of U.S. Patent No. 8,225,829 ("the '829 Patent"), issued July 24, 2012 from an application filed in 2008, which claims priority to an earlier application filed on March 29, 2007.  Titled "Transferable Purse Organizer," the '829 Patent discloses an organizer insert, transferable from one bag (purse to another), that "stabilizes the contents of the bag, while positioning the contents of the bag for ease of location and removal."  Figures 1 and 2 of the '829 patent are reproduced below.
﻿﻿ ﻿ 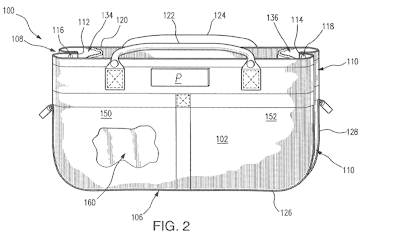 PurseN asserts that the '829 Patent covers its PurseN Organizer Insert, a product that PurseN alleges it first sold "at trade shows in or around August of 2008."  PurseN alleges that by the end of 2009, that product "was being sold to 500 customers, mostly retail stores, throughout the United States," and it earned over $595,000 in sales from that product in 2008 and 2009.  Additionally, PurseN claims rights to what it calls the "PurseN Trade Dress," comprising the following elements:

a.       Smooth, satiny matte fabric covering rigid side walls, and expandable end and bottom walls, with a coordinating patterned fabric lining the inside surfaces of the walls;

b.      A fabric strip extending horizontally across the outer surface of each end wall, at approximately mid-height; and

To illustrate some of those elements, some views of a PurseN Organizer Insert are shown below.﻿

Defendant Great Innovations, Inc. is the named registrant on U.S. Trademark Reg. No. 4,115,614, for the mark PURSFECTION®, for “a purse insert organizer in the nature of a pouch containing pockets and compartments that fits inside purses and handbags for use in storing personal items.”  That registration recites June 30, 2010 as the date of first trademark use.  Great Innovation's website, the "About Us" page of which recites the Florida address ascribed to it in the complaint, and the home page of which recites "As seen on [QVC logo]," depicts PURSFECTION® products such as that shown below.

PurseN alleges that products sold by Defendants without its permission, including the “Pursefection™ Interchangeable Purse Organizer,” infringe not only the ‘829 Patent, but also the PurseN Trade Dress.  PurseN claims that it had notified Defendants in writing of its pending patent application “as early as November 19, 2010.”   Based on its trade dress infringement allegations, PurseN also asserts six claims under Georgia law.  The complaint seeks injunctive and monetary relief, including punitive damages and attorney's fees.

“Section 43(a) [of the Lanham Act] creates a federal cause of action for trade dress infringement. ‘The term 'trade dress' refers to the appearance of a product when that appearance is used to identify the producer.’”[1]  “'Trade dress' involves the total image of a product and may include features such as size, shape, color or color combinations texture, graphics, or even particular sales techniques.”[2]  “In order to prevail on this claim for trade dress infringement under § 43(a), [one] must prove that (1) the product design of the two products is confusingly similar;  (2) the features of the product design are primarily non-functional; and (3) the product design is inherently distinctive or has acquired secondary meaning.”[3]  The Supreme Court has held that two categories of unregistered marks or trade dress are not “inherently distinctive” and thus that secondary meaning must be proven to make them protectible: (1) color; and (2) product configuration.[4]

“Secondary meaning is the connection in the consumer’s mind between the mark and the product’s producer, whether that producer is known or unknown,” [5] and “is used generally to indicate that a mark or dress ‘has come through use to be uniquely associated with a specific source.’”[6]  “In the absence of consumer survey evidence, the Eleventh Circuit considers four factors to determine whether a particular mark has acquired secondary meaning: 1) the length and manner of its use;  2) the nature and extent of advertising and promotion;  3) the efforts made by plaintiff to promote a conscious connection in the public’s mind between the name and plaintiff’s business;  and 4) the extent to which the public actually identifies the name with plaintiff’s goods and services.”[7]

Regarding the “primarily non-functional” requirement: “‘a product feature is functional,’ and cannot serve as a trademark, ‘if it is essential to the use or purpose of the article or if it affects the cost or quality of the article,’ that is, if exclusive use of the feature would put competitors at a significant non-reputation-related disadvantage.”[8]  If the features claimed as a trade dress were also claimed in a utility patent, then the claimed trade dress is presumptively functional, and the plaintiff “must carry the heavy burden of showing that the feature is not functional, for instance by showing that it is merely an ornamental, incidental, or arbitrary aspect of the device.”[9]