This GT Alert highlights news and updates on renewable energy in Latin America.

The government of Mexico City announced an upcoming call for the second phase of the Central Market solar project, estimated to be the biggest solar project installed in a city (36,000 solar modules generating 25GWh per year). The contents of the call will be published on the Federal Electricity Commission website March 28, and offers will be reviewed May 2. The award should take place a week later, and the contract signing is expected to take place May 16, 2022.

Puerto Rico is accelerating in the race towards zero emissions. The Energy Bureau will issue six requests for proposals (RFP) for renewable energy and storage, with the goal of decarbonizing its electricity matrix by 2050.

Project “Tranche 1” launched in 2021, and several model contracts were reviewed in the first half of January 2022, with 15 proposals for a total of 732.72 MW of photovoltaic capacity, and three for 220 MW of energy storage capacity. More projects for 130 MW of solar and 445 MW of battery storage capacity could be added to this process soon.

In 2022, the second part of the project, “Tranche 2 and Tranche 3,” was announced, for which Acción Group was appointed as independent project coordinator.

On Jan. 28, 2022, Minister of Energy and Mines Eduardo Gonzalez Toro confirmed two new public renewable energy auctions would be held in 2022 for a total of 2,000 MW.

The National Electricity Coordinator indicated only one solar photovoltaic project – of 9 MW – started operations January 2022, the lowest value reported over the last year, aside from three projects of 8 MW registered in March 2021.

The National Electric Coordinator assures that eight PMGDs for 44.4 MW of solar photovoltaic already have an operation start date letter (COD) and are expected to begin soon. There are 20 additional projects, totaling 90 MW, that have started their commissioning and are in the process of obtaining their COD.

Argentina has announced completion of construction of the 1.2 MW El Alamito solar farm, which will be expanded to up to 6 MW in the near future. Once the first stage is completed (according to the contract it should be completed May 4), the Neuquén Investment Agency is expected to issue new calls for bids for the second phase of the photovoltaic power plant, with a capacity of up to 3-4 MW.

In addition, Argentinean business executives are proposing to use the PMGD model (limit of up to 9 MW of power) or Brazil's distributed generation regulations (up to 5 MW) as a basis to continue promoting renewables in the country. Their reasoning includes the fact that in 2021, the goal set by national regulations was not achieved, nor did it reach the minimum of 16% of sustainable sources from the total electricity consumption (it only exceeded 12%). The National Energy and Climate Change Plan of 2017’s stated goal of having 14,563 user-generators by 2021 was also not met.

Given that neighboring countries such as Chile and Brazil, who have implemented the proposed scheme, have obtained results in past years, the Argentinean private sector wants to dialogue with the government to change their current model to obtain better results and achieve the established goals in the National Energy and Climate Change Plan.

Guatemalan distributors are expected to unveil the preliminary bases in the coming months. For the time being, they are evaluating that at least 50% of power requirements will be awarded to renewables through contracts of up to 15 years.

According to the terms of reference for the bid, issued by the Electrical Energy National Commission, it is anticipated that the contracting will be made to both “New” and “Operating” plants, with the capacity to award from 50% to 100% of the total power requirement to renewable plants, as long as the total cost of purchasing power and energy is minimized.

In this sense, investments in hydroelectric technology is positioned as a favorite among local entrepreneurs, even though it has faced challenges in the region given the fragile legal certainty of each country, social conflicts, and additional variables.

On Feb. 8, 2022, the Inter-American Development Bank (IDB) announced approval of a financing line for Banco de Comercio Exterior de Colombia (Bancóldex) of 175 billion Colombian pesos (approximately US$45 million). It will also provide US$3.5 million in co-financing and US$1.5 million in non-reimbursable financing from the Clean Technology Fund.

It has been announced that Bancóldex’s financing line will allow the funding of projects focused on battery storage, energy efficiency, among other areas.

As established by the IDB, the loan is aligned to the 2025 Vision, the IDB Group’s roadmap for recovery and inclusive growth in Latin America and the Caribbean, in four fundamental areas: digital economy, productivity, gender and inclusion, and climate change.

On Feb. 8, 2022, the Colombian government announced that new calls auctions will be published when they are determined pertinent, without specifying any date.

Brazil continues its growth in renewables, exceeding 13.5 GW of installed capacity between the distributed and centralized generation segments in January 2022. While only 116 MW came into operation in January, it is estimated that the next calls to be developed could increase the capacity.

Brazil’s New Energy Auction A4/2022 is scheduled to take place May 27, with 1,263 solar projects for 51,824 MW of supply, which could significantly expand the country’s photovoltaic capacity in the coming years. The operational deadline is Jan. 1, 2026.

The Dominican Republic currently has 1,378 MW of renewable installed capacity out of a total of 5,000 MW of power plants of different technologies that dispatch to the National Interconnected Electric System. According to the National Energy Commission (CNE) records, during 2021 the country subscribed multiple PPA contracts with around 10 companies that will be developing wind and solar projects with a 550 MW capacity. The potential for expansion of generation with these technologies would be even higher, since there are around 22 projects currently in the process of receiving the corresponding concessions.

The Dominican Republic is aiming for 25% of electricity demand coverage to come from renewable energies, in accordance with the provisions of Law 57-07 in Chapter IV (special regime for electricity production). To achieve this goal, the government proposes that these investments be made by the private sector, so the state does not incur capital expenditures to build new projects.

Accordingly, the signatory companies are expected to start work on the parks, mainly solar (513.6 MW), in 2022. However, in view of the consumption increase, to achieve the 25% target by 2025, more renewable power plants would need to be operational. Therefore, new tenders are expected in the Dominican Republic.

During 2021 and so far in 2022, multiple Latin American countries made efforts to implement new renewable energy projects. Some of them are in the process of building new solar and wind projects, while others have implemented financing schemes in conjunction with national banks to support these projects.

For reference, below is a table depicting the countries with the largest renewable energy production capacity (in megawatts) in Latin America and the Caribbean in 2020, published by Statista. 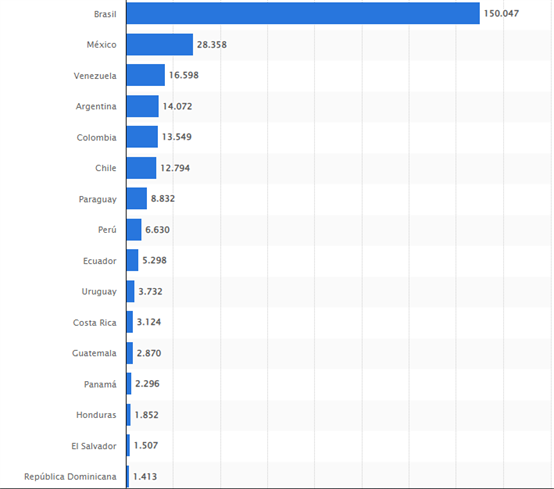 Erick Hernández represents domestic and international clients on environmental and energy matters, including corporate finance, healthcare, regulatory compliance and real estate matters. Erick has represented clients in several project finance, mergers and acquisitions and electric energy tenders, as well as hydrocarbons tender procedures, both in accordance to the new energy reform in Mexico.

Erick has been practicing Mexican environmental, energy, real estate, administrative and regulatory law for more than 15 years, advising Mexican and...