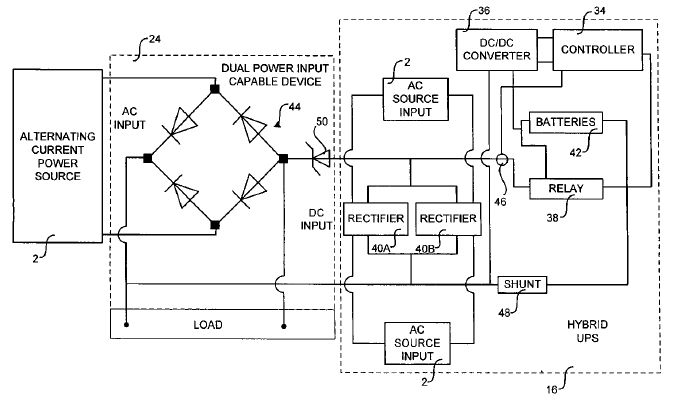 Farmer is the sole named inventor of U.S. Patent No. 7,362,007 ("the '007 Patent"), entitled "Hybrid Uninterruptible Power Supply System."  The claimed system allows for a telecommunications system to alternate between AC and DC power systems based on unplanned interruptions and other events. Representative Figure 5 of the '007 Patent is reproduced below: 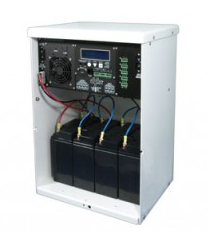 The complaints do not state whether Farmer practices the invention or licenses the patent to any other entities.  The complaints allege that Alpha and Aspin Kemp infringe the '007 patent by "developing, using, offering to sell and/or selling in the United States or importing into the United States" their Alpha Micro 1000 UPS System and Omni B System, respectively.[1] The complaints allege, without detail, that Alpha and Aspin Kemp had "actual knowledge and/or notice of the '007 Patent from a time prior to the filing of the present Complaint," and thus are liable for willful infringement.  The complaints also allege that Farmer will suffer immediate and irreparable harm in the absence of an injunction.

The complaints request preliminary and permanent injunctions -- although no motion for preliminary injunctive relief has been filed in either case -- damages, including trebled damages for alleged willful infringement, and attorneys' fees and costs under 35 U.S.C. § 285.

[1] The Alpha complaint calls the allegedly infringing system the "Micro 1000 USB System," but after inspection of Alpha's website and the '007 Patent, it is evident that this is a typographical error and is intended to refer to the "UPS," or "Uninterruptible Power Supply," system.