In the wake of the Second Circuit’s holding in Berman v. Neo@Ogilvy that the Dodd-Frank Act’s whistleblower provision protects internal disclosures, several commentators are predicting that the Sarbanes-Oxley Act’s whistleblower provision will become obsolete. Dodd-Frank is ostensibly a better remedy than SOX because Dodd-Frank authorizes double back pay and enables whistleblowers to bring their claims directly in federal court without having to exhaust administrative remedies at OSHA. We believe, however, that SOX remains a robust remedy for whistleblowers that have suffered retaliation. Rather than waiving the important remedies SOX offers, a corporate whistleblower should first file a SOX claim and then, as appropriate, remove it to federal court and add a Dodd-Frank claim.

Whistleblowers suffering retaliation have many reasons to continue filing SOX claims. First and foremost, Berman does not conclusively resolve the scope of Dodd-Frank-protected conduct. We believe that the SEC’s interpretive guidance, Berman’s well-reasoned analysis and the majority of district court decisions agreeing with the SEC’s position signal that the Supreme Court will ultimately adopt the SEC’s position.

But in the interim, there is some risk that other circuits might agree with the Fifth Circuit’s narrow interpretation of Dodd-Frank whistleblower protection, and therefore it is critical to preserve the claim by filing a SOX retaliation action within the 180-day statute of limitations. And even if Berman and the SEC’s position becomes the law of the land, at least six aspects of SOX continue to provide a superior remedy to Section 922 of Dodd-Frank:

In its seminal decision in Sylvester v. Parexel, the DOL’s Administrative Review Board adopted a broad construction of SOX-protected conduct. Under Sylvester, SOX complainants need only show that they reasonably believed the conduct complained about violated a relevant law. And an employee need not wait until misconduct occurs to make a protected disclosure, so long as the employee “reasonably believes that the violation is likely to happen.”

Further, a complainant need not allege shareholder fraud to receive SOX’s protection. SOX was enacted to address “corporate fraud generally,” and so a reasonable belief that a violation of “any rule or regulation of the Securities and Exchange Commission” could lead to fraud is protected, even if the violation itself is not fraudulent. For example, SOX would protect a disclosure about deficient internal controls over financial reporting, even though there is no allegation of actual fraud.

The reasonable belief standard under SOX has other favorable attributes under Sylvester. It does not require complainants to tell management or the authorities why their beliefs are reasonable. SOX complainants no longer need to show that their disclosures “definitively and specifically” relate to the relevant laws. And SOX complainants do not need to establish criminal fraud. Requiring a complainant to allege, prove or approximate the elements of fraud would be contrary to the whistleblower protection provision’s purpose.

The “contributing factor” causation standard under SOX is very favorable for whistleblowers. A SOX whistleblower can prevail merely by proving that protected activity, either alone or in combination with other factors, tended to affect the outcome of the challenged adverse action in any way. There is no requirement to prove retaliatory motive. Halliburton Inc. v. Admin. Review Bd., 771 F.3d 254, 263 (5th Cir. 2014) (citing Allen v. Admin. Review Bd., 514 F.3d 468, 476 n.3 (5th Cir. 2008)).
In contrast, Section 922 of Dodd-Frank employs the term “because of” and is therefore subject to Nassar. But a recent Fourth Circuit decision suggests that Nassar did not fundamentally alter the McDonnell Douglas burden-shifting framework and there is no requirement to show but for causation to establish a prima facie case. See Foster v. Univ. of Maryland, No. 14-1073 (4th Cir. May 21, 2015).

These verdicts suggest that uncapped compensatory damages are a potent remedy for corporate whistleblowers. Unfortunately, Section 922 of Dodd-Frank does not authorize compensatory damages. And there is some ambiguity about whether Section 922 of Dodd-Frank provides the right to a jury trial, whereas Section 806 of SOX includes an express right to a jury trial.

Onerous Burden for Employers to Prove Same-Decision Defense Under SOX

Under SOX’s burden-shifting framework, once the complainant has demonstrated by a preponderance of the evidence that his or her protected conduct was a contributing factor in the adverse action, the employer can avoid liability only by demonstrating by clear and convincing evidence that it would have taken the same adverse action in the absence of any protected activity. This is an onerous burden for employers, especially under the parameters set forth by the DOL’s Administrative Review Board in Speegle v. Stone & Webster Construction, ARB 13-074, 2005-ERA-006 (ARB Apr. 25, 2014).

In the first prong of the analysis, the employer must present: (1) an unambiguous explanation for the adverse action in question and (2) evidence demonstrating that a proposed fact is “highly probable.” Adopting a 1984 Supreme Court definition of the standard, the DOL’s Administrative Review Board found that evidence is clear and convincing only if it “’immediately tilts’ the evidentiary scales in one direction.”

In the second prong of the Speegle framework, an employer must prove that it would have taken the same action, as opposed to just proving that it could have taken the same action. For Stone & Webster, that meant proving that it would have fired Speegle solely due to one heated oral confrontation, as opposed to merely proving that a heated or insubordinate oral complaint by an employee can justify termination. In assessing what would have happened in the absence of protected activity, the administrative law judge should consider how the facts would have been different in the absence of the activity. For example, Speegle’s repeated internal disclosures that using apprentice painters was unsafe engendered tension with management and therefore the administrative review board erred by considering these tensions as evidence supporting the mixed motive defense (absent the protected conduct, Speegle would have had a better working relationship with management).

Exhausting Administrative Remedies Can Be Beneficial

As many of our whistleblower clients have suffered significant damage to their career prospects, they are eager to proceed with their claims and get before a jury. Consequently, the opportunity to proceed directly in federal court can be very appealing compared to the requirement under SOX to exhaust administrative remedies at OSHA.

There are, however, some advantages to commencing the proceeding at OSHA. The investigation provides an opportunity to discover the employer’s defenses and obtain binding admissions. And if OSHA substantiates the complaint, it can order preliminary reinstatement. While OSHA is struggling with an unprecedented caseload and limited resources, it has made substantial efforts to invigorate its Whistleblower Protection Program and merit findings have increased.

Post-Berman, SOX remains an important remedy for corporate whistleblowers. The following table summarizes some of the key issues that whistleblowers should consider before waiving an available remedy to combat whistleblower retaliation: 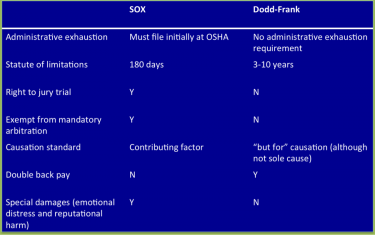