The U.S. Supreme Court decided not to review an appellate court decision that held a false rumor about a woman “sleeping” her way to a promotion can give rise to a hostile work environment claim.  This means that the February 2019 decision by the U.S. Court of Appeals for the Fourth Circuit in Parker v. Reema Consulting Services, Inc. will stand.  In Parker, the Fourth Circuit held that, where an employer participates in circulating false rumors that a female employee slept with her male boss to obtain a promotion, this constitutes Title VII gender discrimination.

Evangeline Parker started worked for Reema Consulting Services, Inc., (“RCSI”) at its warehouse facility as a low-level clerk.  She was promoted six times, ultimately rising to Assistant Operations Manager.  About two weeks after she was promoted to a manager position, she learned that some male employees were circulating “an unfounded, sexually-explicit rumor about her” that “falsely and maliciously portrayed her as having [had] a sexual relationship” with a higher-ranking manager to obtain her management position.

The rumor originated with another RCSI employee who was jealous of Parker’s achievement, and the highest-ranking manager at the warehouse facility participated in spreading the rumor.  Parker’s complaint alleged that as the rumor spread, she “was treated with open resentment and disrespect” from many coworkers, including employees she was responsible for supervising.

At an all-staff meeting at which the rumor was discussed, the warehouse manager slammed the door in Parker’s face and excluded her from the meeting.  The following day, the warehouse manager screamed at Parker and blamed her for “bringing the situation to the workplace.” He also stated that “he could no longer recommend her for promotions or higher-level tasks because of the rumor” and that he “would not allow her to advance any further within the company.”  A few days later, the warehouse manager “lost his temper and began screaming” at Parker, and Parker then filed an internal sexual harassment complaint with RCSI Human Resources.  Shortly thereafter, RCSI gave Parker two warnings and terminated her employment. 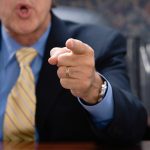 Parker brought a discrimination claim, alleging that she was subjected to a hostile work environment.  The district court dismissed her claim on the grounds that 1) the harassment was not based upon gender and instead based upon false allegations of conduct by her, and 2) the conduct was not sufficiently severe or pervasive to have altered the conditions of Parker’s employment because the rumor was circulated for just a few weeks.  Judge Titus found, “Clearly, this woman is entitled to the dignity of her merit-based promotion and not to have it sullied by somebody suggesting that it was because she had sexual relations with a supervisor who promoted her.”  However, he continued “that is not a harassment based upon gender.  It’s based upon false allegations of conduct by her.  And this same type of a rumor could be made in a variety of other context[s] involving people of the same gender or different genders alleged to have had some kind of sexual activity leading to a promotion.”  Ultimately, Judge Titus held that “the rumor and the spreading of that kind of a rumor is based upon conduct, not gender.

Taking into account all of the allegations of the complaint, including the sex-based nature of the rumor and its effects, the Fourth Circuit held that the rumor that Parker had sex with her male superior to obtain a promotion was gender-based in that it implied that she “used her womanhood, rather than her merit, to obtain from a man, so seduced, a promotion.”  The court found that the rumor invoked “a deeply rooted perception — one that unfortunately still persists — that generally women, not men, use sex to achieve success.”  This double standard precipitated by negative stereotypes regarding the relationship between the advancement of women in the workplace and their sexual behavior can cause superiors and coworkers to treat women in the workplace differently from men.  Thus, the rumor about Parker sleeping her way to a promotion constituted a form of sexual harassment.

[T]he harassment was continuous, preoccupying not only Parker, but also management and the employees at the Sterling facility for the entire time of Parker’s employment after her final promotion.  The harassment began with the fabrication of the rumor by a jealous male workplace competitor and was then circulated by male employees.  Management too contributed to the continuing circulation of the rumor.  The highest-ranking manager asked another manager, who was rumored to be having the relationship with Parker, whether his wife was divorcing him because he was “f–king” Parker.  The same manager called an all-staff meeting, at which the rumor was discussed, and excluded Parker.  In another meeting, the manager blamed Parker for bringing the rumor into the workplace. And in yet another meeting, the manager harangued Parker about the rumor, stating he should have fired her when she began “huffing and puffing” about it.

Parker correctly recognizes that gender-based stereotypes can prevent women from advancing in the workplace and that Title VII bars employers from using negative gender stereotypes to harass employees.