In a complaint filed in the Atlanta Division of the Northern District of Georgia on December 19, 2012, James Williams and Laurie Williams (“Williams”) filed a complaint against the Columbus Bar Association (“Columbus”) seeking cancellation of Columbus' trademark registration, damages, and an injunction. To avoid confusion, we disclose that the Columbus Bar Association is the bar association in Columbus, Ohio, not Columbus, Georgia.

The Williams have published a website known as www.lawyerfinder.com continuously since May 31, 1997. The complaint asserts that Columbus has been marketing, offering for sale, and selling services under the marks LAWYERFINDER, LAWYERFINDER.COM, and/or COLUMBUS LAWYER FINDER.COM and has further federally registered as trademarks LAWYERFINDER.COM (Registration No. 3,933,108) granted on March 15, 2011, and COLUMBUS LAWYER FINDER.COM (Registration No. 3,699,866) granted on October 20, 2009.  In support of their use, the complaint attached an affidavit from James Williams as Exhibit A and an affidavit of Christopher Butler, Office Manager at the Internet Archive, operator of a service known as the Wayback Machine.[1]  An image from the current Williams’ website is reprinted below: 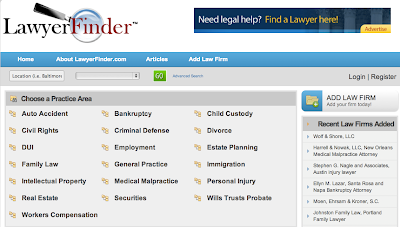 The Williams’ website provides users throughout the United States with a searchable directory of advertisements as well as informational legal articles and other services.  On June 16, 2000, the Williams filed trademark application Serial No. 78/013019, which was ultimately abandoned by their failure to timely respond to an office action.  A new trademark application, Serial No. 85/484175 was filed by the Williams on November 30, 2011, but was suspended by letter dated June 15, 2012, for pending civil proceedings.

The complaint assets that Columbus commenced publication of www.columbuslawyerfinder.com on June 5, 2008, more than eight years after the Williams began using the LAWYERFINDER mark.  After adoption of its marks, Columbus began marketing “confusingly similar” services on a national basis including the licensing of “LAWYERFINDER” to other organizations, including Cincinnati LawyerFinder, Clark County LawyerFinder, New Haven Lawyerfinder, and Pittsburgh LawyerFinder.  An image from the home page of the Columbus website is reproduced below: 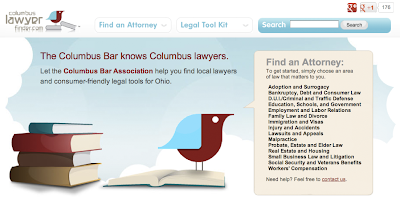 The complaint alleges irreparable harm has been suffered as a result of the Columbus announcement and launch of an advertising campaign confusing the public and creating misimpressions that the Williams are unauthorized users of Columbus’ marks.

The complaint asserts fraud on the U.S. Patent and Trademark Office (USPTO) based on Columbus’ knowledge or access to knowledge of the Williams’ mark, as their website had been active for more than a decade before Columbus’ first use of the accused marks. The complaint asserts that Columbus did not disclose the Williams’ use of the mark to the USPTO and a Columbus agent wrongfully attested that “no other person, firm, corporation, or association has the right to use the mark in commerce, either in the identical form thereof or ins such near resemblance thereto as to be likely, when used on or in connection with the goods/services of such person, to cause confusion, or to cause mistake, or to deceive.”  The complaint also asserts that Columbus’ sworn declaration that it was using the mark LAWYERFINDER.COM in commerce on September 20, 2010, was false.  The Williams ask that Columbus registrations of LAWYERFINDER.COM (Reg. No. 3,933,108) and COLUMBUS LAWYER FINDER.COM (Reg. No. 3,699,866) be cancelled.

The case is Williams v. Columbus Bar Ass’n, No. 1:12-cv-4382, filed 12/19/12 in the U.S. District Court for the Northern District of Georgia, Atlanta Division, and has been assigned to U.S. District Judge Richard W. Story.

[1] Quote from the site:  “Browse through over 150 billion web pages archived from 1996 to a few months ago. To start surfing the Wayback, type in the web address of a site or page where you would like to start, and press enter. Then select from the archived dates available. The resulting pages point to other archived pages at as close a date as possible. Keyword searching is not currently supported.”