From Westeros to Government and Business, Women Have Less Voice

In the final, contentious season of HBO’s fantasy epic “Game of Thrones,” two powerful queens face off in a battle for control over the entire known world. Meanwhile, other formidable female characters outmaneuver their rivals to command entire kingdoms and (spoiler alert) strike the blow that saves humanity from eternal darkness. But looking solely at on-screen speaking time, you’d never know that women were main characters and, arguably, the show’s driving force. According to Statista, women on the show got just 22% of the speaking time in the last season, and only cracked 30% in one of the show’s eight seasons. 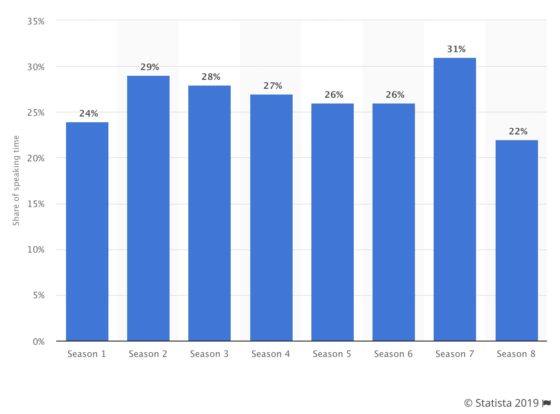 Of course, this kind of imbalance is hardly confined to the fictional world. Recently, Montreal city official Sue Montgomery made headlines for vividly illustrating the issue in the city’s monthly executive committee meetings. Montgomery tracked the difference in the amount of time that men and women spoke by knitting in red when men were speaking and in green when women did. The resulting product is overwhelmingly red with occasional smatterings of green. In response to questions on Twitter about the committee’s gender makeup, Montgomery noted that the committee is far more balanced, comprising 31 women and 34 men. The concepts of “mansplaining” (when men condescendingly explain something to women) and acknowledging that men often talk over women in both professional and personal settings are now increasingly familiar and more widely discussed cultural issues. In fact, Merriam-Webster officially added “mansplaining” to the dictionary in March 2018. There is even a website called arementalkingtoomuch.com, which helps users track these disparities during meetings or social situations by clicking a button when “a dude” is talking and another when “not a dude” is talking.

A 2017 study by research company Prattle did just that, examining 155,000 business conference calls from the past 19 years, finding that men dominated the meetings by speaking 92% of the time. The study also found that women’s remarks in these meetings largely focused on investor relations staff introductions and not as much substantive contributions. While studies have shown that men far outnumber women in corporate leadership positions, as with the Montreal city meetings, Prattle CEO Evan Schnidman noted that the statistics on talking time do not necessarily correlate to the rate at which men outnumber women in the room. Indeed, Schnidman said, “Male executives provide significantly more verbose answers to analyst questions than their female counterparts.”

Gender diversity in corporate settings is hardly just about optics or legal requirements, it also offers broader benefits for employees and their employers that can pose critical advantages. For example, as discussed in “Pale, Stale and Male: Does Board Diversity Really Matter?” in Risk Management, McKinsey & Company found that companies with higher gender diversity in their board rooms are 21% more likely to have “above-average profitability” than those with lower rates. Efforts focusing on equitable representation particularly continue to lag with regard to women of color, who are the least represented group in every corporate setting except entry-level positions.

However, the cases above indicate that a balance of men and women in the room may not be enough, leading more people to discuss how their companies can promote both diversity and inclusion in their workplaces. In addition to focusing on diversity of those in the room, employers should be taking steps to ensure that they are facilitating a diversity of voices as well. Creating environments that encourage more women to voice their opinions can foster different perspectives and more innovation, and promote employee loyalty, engagement and well-being.