Will Bankruptcy Trustee and Receiver Litigation Be Different in the Future?

The disruption to the global economy that has ensued since the World Health Organization declared COVID-19 a pandemic has resulted in a sharp increase in the number of companies filing for bankruptcy. Notably, the number of U.S. bankruptcy filings by companies with over $100 million in assets increased by 84 percent during the first three quarters of 2020 compared to the same period in 2019.[1] In the second quarter of 2020, such filings reached the second-highest total for any quarter in the last fifteen years—just below the all-time high in the first quarter of 2009 during the aftermath of the 2008–2009 financial crisis (the Financial Crisis).[2]

Bankruptcy and insolvency proceedings can result in litigation filed by trustees and receivers against insiders and third parties. Such lawsuits are generally initiated several months after the beginning of the bankruptcy or insolvency proceeding due to the time needed to investigate claims. For example, a wave of trustee and receiver litigation was filed in the years that followed the Financial Crisis.

This article discusses how certain new accounting and auditing standards implemented after the Financial Crisis could affect the expected next wave of trustee and receiver litigation.

Review of Historical Data on Trustee and Receiver Litigation

Bankruptcy trustees are typically appointed by the court in (1) Chapter 7 liquidation proceedings; or (2) Chapter 11 proceedings, upon request of a party in interest or the United States Trustee, either when fraud, dishonesty, incompetence, or gross mismanagement of the affairs of the debtor by current management are alleged, or if such appointment is in the interests of creditors.[3] Less frequently, the debtor’s assets and operations are placed under receivership and a receiver is appointed by the court to administer or liquidate the debtor’s property.[4]

Trustees and receivers have historically filed claims for fraud and breach of fiduciary duty against the insolvent or bankrupt company’s former directors, officers, and/or executives as part of bankruptcy proceedings. It is also not uncommon for trustees and receivers to sue third-party service providers, such as the company’s public accountants or attorneys, for professional malpractice or to seek disgorgement or repayment of professional fees. In the years following the Financial Crisis, trustee- and receiver-led lawsuits increased in tandem with the surge in bankruptcy proceedings. Based on this historical evidence, such lawsuits are expected to also arise from the COVID-19 pandemic albeit with some delay.

The number of lawsuits filed by trustees in U.S. bankruptcy courts increased significantly following the Financial Crisis, nearly tripling in 2009 compared to 2008. The number of lawsuits peaked in 2010 and remained high in 2011—when the number of filings was five times greater than in 2008. Trustee bankruptcy lawsuits have remained above pre-2009 levels and were on a relatively stable trend between 2012 and 2019 with annual fluctuation. 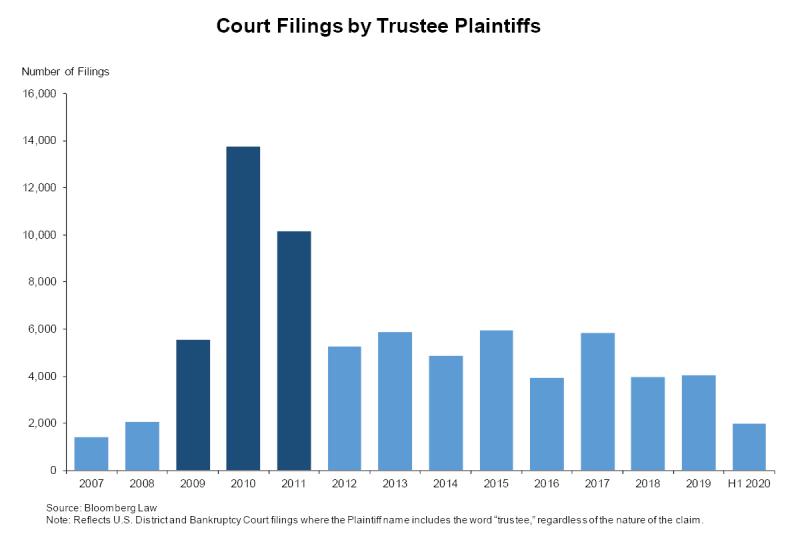 Examples of trustee-led cases filed in May and June 2020 include actions brought to recover fraudulent transfers, actions brought against third-party service providers to avoid or recover fees either because the company was insolvent at the time of payment or due to alleged professional negligence, and actions seeking to enforce insurance or guaranty payments.

Although the number of lawsuits initiated by receivers is relatively lower than filings initiated by trustees,[6] a similar increase can be observed during the years after 2007. The number of lawsuits filed by receivers increased steadily in the years following the Financial Crisis. Receiver filings increased by 50 percent between 2008 and 2009, and remained high through 2014. As of June 30, 2020, about the same number of filings were registered in the first half of 2020 as during the first half of 2008. Moreover, in 2008, the majority of filings were filed by the FDIC acting as receiver for financial institutions.

Receiver-led cases filed in May and June 2020 include actions involving allegations of fraud, actions seeking relief from breach of obligations under an insurance policy, or actions seeking to recover allegedly improperly diverted funds. 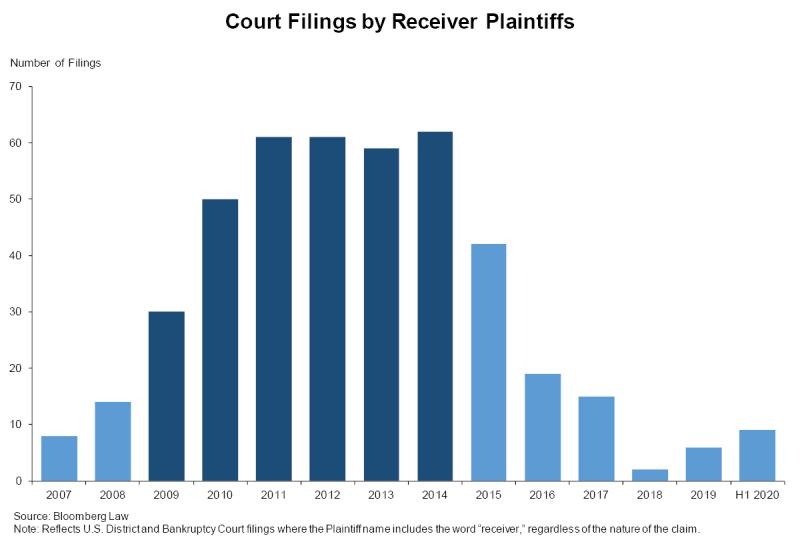 These historical trends in trustee- and receiver-led litigation suggest that the COVID-19 pandemic will trigger another wave of bankruptcy and liquidation-related lawsuits.

Recent changes in accounting and auditing standards may affect litigation against corporate and individual defendants. This section assesses the impact of changes related to going concern disclosures and critical audit matters.

One post­–Financial Crisis standard that may affect trustee and receiver litigation is the disclosure of going concern issues by reporting entities. At the time of the Financial Crisis, there was no going concern disclosure guidance in Generally Accepted Accounting Principles (GAAP) for reporting entities. Instead, relevant guidance in auditing literature and federal securities law required going concern opinions by external auditors.[7] That changed when the Financial Accounting Standards Board (FASB) issued Accounting Standard Codification Subtopic 205-40, Presentation of Financial Statements – Going Concern (“Subtopic 205-40”).[8] Subtopic 205-40 became effective for the annual period ending after December 15, 2016.

Second, the new standard extended the period over which the entity’s ability to continue as a going concern needs to be assessed. Specifically, under the prior guidance, including auditing standards issued by the Public Company Oversight Board (PCAOB), the auditor was required to evaluate whether the entity had the ability to continue as a going concern for one year beyond the date of the financial statements.[10] Under the new accounting standard, the one-year period begins on the date the financial statements are issued.[11] As such, trustees and receivers could use this change to claim a failure to disclose going concern issues in financial statements issued for a fiscal year ended more than twelve months before the bankruptcy event. For most public companies, the effects would likely be a matter of weeks. For example, large accelerated filers are required to file their 10-Ks with the SEC sixty days after the year-end.[12] The effect can be greater for private companies that sometimes issue their financial statements months after the year-end. Thus, the timing of a bankruptcy may affect when trustees and receivers assert claims in lawsuits on behalf of the bankrupt entity.

A second post­–Financial Crisis standard that may affect trustee and receiver litigation is the disclosure of critical audit matters (CAMs) by external auditors. Under the new standard, external auditors of public companies are required to include in their audit report a disclosure of matters that involve especially challenging, subjective, or complex auditor judgment.[13] The disclosure by the auditor generally includes a description of how the CAM was addressed in the audit, such as the audit procedures performed in response to the CAM. For fiscal years ended starting on June 30, 2019, auditors of large accelerated filers are required to evaluate the disclosure of CAMs, if any.

Given the new CAM standard, there may be a greater number of going concern CAMs in early 2021 annual filings for companies with December 15, 2020, or later fiscal year ends if the economic environment remains challenging.

The disclosure of CAMs could affect lawsuits by trustees and receivers against management and the auditor. During the standard-setting process, the PCAOB acknowledged that the new CAM standard could generally increase the risk of litigation in connection with financial disclosures. Trustee and receiver litigation represents one type of litigation that may be affected by the implementation of the CAM standards.[15]

Bankruptcy and insolvency lawsuits by trustees and receivers against insiders and third parties are generally initiated months after the beginning of the bankruptcy or liquidation proceeding. The COVID-19 pandemic has created substantial uncertainty and has particularly affected certain industries such as travel, entertainment, and retail. These lawsuits may differ from past litigation due to the new accounting and auditing standards that became effective after the Financial Crisis.

The views expressed in this article are solely those of the authors, who are responsible for the content, and do not necessarily represent the views of Cornerstone Research.

[6] Between January 2007 and June 2020, only 320 filings were registered by receivers (in U.S. District Courts and Federal Bankruptcy Court), compared to a total of 74,535 filings by trustees (in U.S. Bankruptcy Courts).

[11] Or, in certain circumstances, available to be issued.

Structuring a PDP Loan to Protect the Lender From an Airline Bankruptcy
By
Tom Healey
The Supreme Court Confirms That Passive Retention of Property Does Not Violate Section 362(a)(3)
By
Restructuring & Insolvency Practice at Squire Patton Boggs
Supreme Court Issues Decision in City of Chicago v. Fulton
By
Lance P. Martin
Confusion in Bankruptcy Courts Regarding Debtor Eligibility for PPP Loans
By
Brendan G. Best
Advertisement

Jean-Philippe “JP” Poissant has more than ten years of experience evaluating complex accounting, professional liability, executive compensation, valuation, corporate governance, and financial distress issues. His experience also includes analysis of loss causation and damages in disclosure cases on behalf of clients in a wide range of industries. Mr. Poissant has managed large teams with multiple experts and has worked across all phases of the litigation process, including in state and federal courts, mediation, arbitration, and regulatory matters.