The title of Zac Brown Band's album You Get What You Give, released in September 2010, may prove ironically prophetic if a new copyright lawsuit results in an award of sought remedies.

The complaint, filed on November 30, 2012 by creative leatherworker Kyle Landas, alleges that Landas personally presented Zac Brown with a Landas-designed guitar strap but did not give Zac, the band, or the associated entities rights to the design.  Landas, according to the complaint, worked for one of the associated entities sued, Southern Hide, Inc. (Southern Hide), after creating the design until he was fired in August of this year.

Landas seeks an injunction and damages against 13 defendants for copyright infringement of his Unity Tree design.  The complaint tells an intriguing behind-the-scenes story in the country music world that does little to enhance the image of Zac Brown.

According to the complaint:  Mr. Landas began creation of fine leather goods with his own custom leather shop – Under One Moon Custom Leather Shop – in 2008 after being diagnosed with a central nervous disorder ending his career as a commercial masonry contractor.  His new career blossomed and his work has been displayed at the County Music Hall of Fame and the Hank Williams Museum.  A design that Mr. Landas created for Farm Aid use on leather straps in August 2008 was attached to the complaint as Exhibit A: 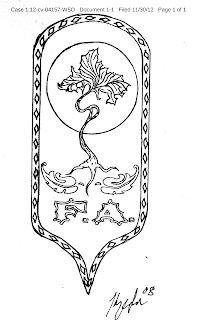 Further according to the complaint:  Landas adopted the image as the emblem of his personal struggle with illness, christening the design “Unity Tree.”  To further his creative leather-working, Mr. Landas presented county artists with custom guitar straps, including the Unity Tree strap design presented back stage to Zac Brown on June 17, 2010.  The following month, Landas was invited by Brown to work for Southern Hide.  Prior to taking employment with Southern Hide, Landas visited the company in late July 2010 and was shown the layout for a forthcoming Zac Brown Band album – You Get What You Give.  The planned layouts he viewed incorporated his Unity Tree design, for which no permission had been obtained from Landas.  Upon remarking on the lack of permission, Landas was advised that he should receive royalties.

The story continues:  Landas took employment with Southern Hide but was not pleased with his treatment.  He continued to press about his rights to the Unity Tree design and was told that the design planned for the album had been traced from a cell phone image of the leather strap design he had included on the guitar strap gift to Mr. Brown.  In August 2010, according to paragraph 38 of the complaint, Landas was advised that Southern Hide had “registered the copyright in the design for themselves and it was no longer Landas’ design.”  The design was later included in the album artwork, on the CD itself, and on t-shirts.  Pictures of the CD (downloaded from the web) and the t-shirt (from Exhibit E to the complaint) are pictured below.

The Landas complaint details other uses of the Unity Tree design in paragraph 80.  Although unhappy with his working conditions and unable to obtain a royalty commitment for use of the Unity Tree design, the Landas complaint describes a stressful working relationship (including name-calling and his movement into a small unventilated space referred to as the “broom closet”), which did not end until Southern Hide terminated Landas’ employment in August 2012.  During 2011 and 2012, while still in the employ of Southern Hide, Landas was repeatedly asked to sign a “Confidentiality/Work-For-Hire/Licensing” agreement containing provisions waiving all prior claims against the company and all rights to Unity Tree.  Landas repeatedly refused to sign.

After his discharge from employment with Southern Hide, Landas registered his claimed copyright in the Unity Tree design on October 9, 2012 (Registration No. VA 1-833-496), retained counsel to send demand letters, and commenced suit on November 30.

In short, Mr. Landas seeks to “Get Back” what his complaint alleges “He Didn’t Give” – rights to the Unity Tree design on the guitar strap he presented back stage to Mr. Zac Brown as a gift in June 2010 and thereafter wrongfully taken to promote You Get What You Give.

A photo of Mr. Landas and Zac Brown “in happier times” was posted by Nashville Gab.  The Atlanta Journal-Constitution, through its blog The Buzz, has also written of this case.

The case is Kyle Landas v. Zachary Alexander Brown, et al., No. 1:12-cv-4157-WSD, filed 11/30/12 in the U.S. District Court for the Northern District of Georgia, Atlanta Division, and has been assigned to U.S. District Judge William S. Duffey, Jr.