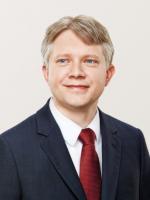 Jason Stach has extensive experience in several areas, including challenging and defending patents in post-grant proceedings at the U.S. Patent and Trademark Office (USPTO), litigating in district courts and at the U.S. International Trade Commission (ITC), representing clients in appeals before the U.S. Court of Appeals for the Federal Circuit, managing worldwide patent portfolios, and counseling clients on due diligence and freedom-to-operate issues. Jason handles cases involving many different technologies, including electrical, computer, software, chemical, pharmaceutical, medical device, and mechanical technologies.

Jason has been lead or back-up counsel in over 125 Patent Trial and Appeal Board (PTAB) trials, including inter partes reviews (IPRs), covered business method reviews (CBMs), and post-grant reviews (PGRs), and has consulted on dozens of other PTAB trials. He also represents clients before the U.S. Court of Appeals for the Federal Circuit in appeals stemming from PTAB decisions and court actions. In addition to his trial experience, he has taken and defended dozens of depositions, and has successfully argued before the Federal Circuit, before the PTAB, at district court claim construction and summary judgment hearings, and at ITC hearings.

Jason has been recognized by The Legal 500 U.S. as a “Leading Lawyer” for patent prosecution, re-examinations, and post-grant proceedings, and by Intellectual Asset Management as a leader in litigation and transactions in Georgia. He is a recipient of the ABA/BNA Award for Excellence in Intellectual Property.

As a former leader of Finnegan’s PTAB trials section, Jason coordinated the firm’s PTAB training programs, workflow, and other aspects of the practice. He serves as a co-managing editor for Finnegan’s AIA blog on PTAB trials and AIA provisions, and as the hiring partner for Finnegan’s Atlanta office, overseeing the office’s summer associate program and its other recruiting efforts. His pro bono experience includes representing military veterans before the U.S. Court of Appeals for Veterans Claims.