European regulators recently announced plans to step up their focus on cross-market manipulation surveillance under the Market Abuse Regulation (MAR). In a cross-market manipulation scheme, traders are alleged to place orders or to trade in one financial product with the intent of impacting the market of a related product or the same product traded on a different venue.

Following a request by the European Commission, on 3 October 2019, the European Securities and Markets Authority (ESMA) published a Consultation Paper on MAR addressing this type of conduct.[1] Among other topics, the Consultation Paper discusses the possibility of establishing an EU framework for cross-market order book surveillance in relation to market abuse.

A similar approach has been put forward by the UK’s Financial Conduct Authority (FCA). In a speech on 6 February 2020, Mark Steward, the FCA’s Executive Director of Enforcement and Market Oversight, confirmed that the “UK and EU law here remain, for now, entirely aligned.”[2] While he insisted that the FCA works “with a very high degree of precision and collaboration with both US regulators and EU authorities on issues that affect our markets,” he stressed the need to “avoid fragmentation in our markets which will provide wrongdoers with arbitrage opportunities for misconduct.” In an effort to step up its cross-market surveillance and enforcement, he announced the FCA’s new ability “to consolidate the [FTSE 300] order book so we can aggregate orders in the same stock across different platforms.” It seems this investment in consolidated data allows an increased level of cross-market surveillance.

While these recent increased cross-market surveillance efforts should be of note to market participants across the EU, UK and US, early cases of enforcement of cross-market manipulation by UK and US authorities stand out and provide guidance in evaluating future matters: FCA v. Da Vinci Invest Limited,[3] and In the Matter of: Michael D. Franko.

In 2015, the High Court of Justice in London imposed penalties and awarded injunctions against five defendants for alleged spoofing that had taken place in 2010 and 2011.[4] The defendants included companies and traders associated with Da Vinci Invest Limited.[5] In this instance, the traders did not trade directly in the company shares, but rather traded contracts for differences (CFDs),[6] a type of derivatives contract that was priced in relation to company shares traded on the London Stock Exchange (LSE) and multilateral trading facilities (MTFs), including BATS Europe, Chi-X Europe, and Turquoise. According to the Judgment of the High Court of Justice, Chancery Division, the manipulative behaviour of Da Vinci traders consisted of “layering” or “spoofing” on the electronic trading platform of the LSE as well as different MTFs.

The FCA’s investigation found a total of 1,862 suspicious incidents, amounting to approximately 97 per cent of the defendants’ gross profit.[7] In each incident there was a “saw tooth” pattern caused by the successive creation of large cumulative net order positions on opposite sides of several different trading venues’ order books in which the stocks at issue were traded.[8] According to the FCA, “[t]he share price movement correlated with the saw-tooth pattern of order entry in almost every case.”[9] The FCA imposed a fine of £7,570,000.[10]

Figure 1 illustrates an example of one such incident. It shows the LSE order book and transactions for the stock of Aquarius Platinum Limited (AQP) from a period when alleged layering and spoofing activity described by the UK’s High Court occurred (6 December 2010 between 11:00:00 and 11:45:00 UTC). The saw-tooth pattern induced by defendants’ layering of non-bona fide orders is obvious. Around 11:09 a block of blue (indicative of relatively small orders) underneath a large block of orange and red (indicative of large orders) appears close to the market midpoint on the sell side. Shortly after this block of blue disappears, and after an increase in the price of AQP, a large block of blue appears on the buy side, seemingly pushing up the price of AQP further. When this block disappears from the buy side, another block of blue underneath a large block of orange and red appears close to the midline on the sell side. This pattern repeats another five times. Over the course of this saw-tooth pattern, defendants submitted and executed genuine orders on different MTFs whenever the prices across the different platforms had moved in a favourable direction. 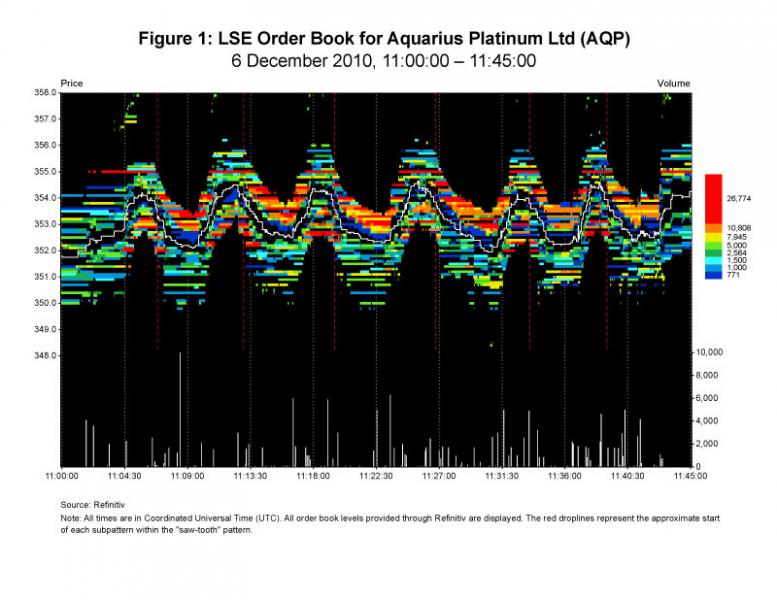 In the Matter of: Michael D. Franko

In September 2018, the US Commodity Futures Trading Commission (CFTC) settled charges against Victory Asset Inc. (Victory) and Michael D. Franko (Franko) for spoofing and cross-market manipulation in US and UK markets. The CFTC imposed civil monetary penalties on Victory and Franko of $1.8 million and $500,000, respectively.[11] During the period of the alleged manipulative conduct, Franko was employed by one of Victory’s predecessor entities.

According to the CFTC, the cross-market scheme involved “spoofing in one market to benefit a position in another market, where the price of the two markets is generally correlated, particularly in the short term.”[12] The CFTC found that Franko placed a relatively small bid or offer with the intent to execute that order in one market (e.g., on a US commodities exchange) and then, prior to the execution of the bona fide order, placed a larger order in a different market (e.g., on a UK commodities exchange) “with the intent to cancel that order before execution.”[13] For example, the CFTC determined that Franko placed one or more non-bona fide orders in copper futures on the UK-based London Metal Exchange (LME) to benefit a genuine order that he had placed in copper futures on the US-based Commodity Exchange (COMEX), a designated contract market that is part of the CME Group, “taking advantage of the correlation in price between these markets.”[14]

In its order, the CFTC provides an example of how “Franko’s Spoof Orders were designed to create or exacerbate order book imbalance in the Relevant Markets, for the benefit of his Genuine Orders.”[15] For this example, the CFTC provides the date at issue (17 December 2013) as well as information on price levels and quantities of orders, but does not provide the precise timestamps. An analysis of the COMEX and LME copper futures data on 17 December 2013 shows that there is one instance that matches significant aspects of the example trading pattern as identified by the CFTC.[16] Figure 2 illustrates the pattern described for LME copper futures. Around 13:23:46 UTC, 100 contracts were placed on the LME at the second best bid of $7,277.25. According to the CFTC, shortly before placing the bid order for 100 contracts on the LME, Franko placed two sell orders of 11 contracts each on COMEX. The two sell orders were “iceberg orders that only showed to the market as one lot.”[17] The two sell orders were fully and partially filled, respectively, while the bid order of 100 contracts was outstanding on the LME. 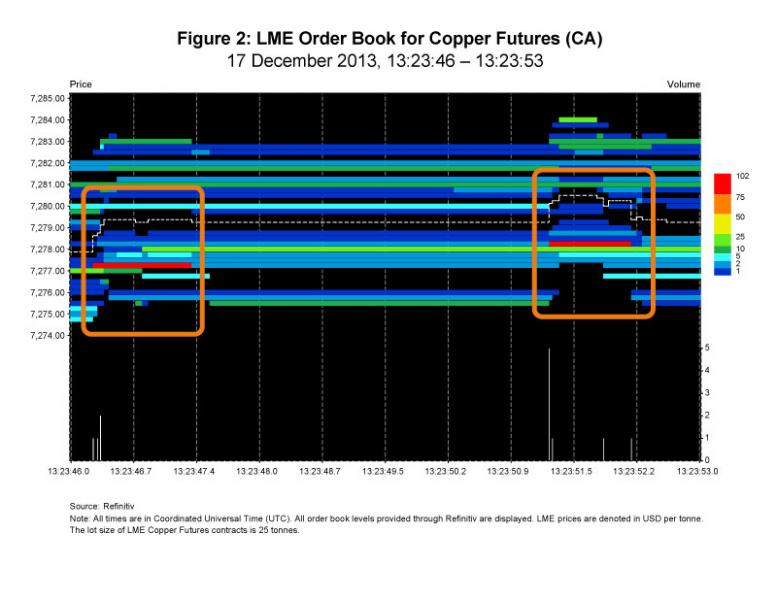 Approximately one second after placing his bid order on the LME, Franko cancelled it. He then placed a second buy order for 100 contracts “that was at a higher price than his previous Spoof Order, but, because of market movement, it was placed at the third best bid.”[18] This is shown in Figure 2, at 13:23:51 UTC, when the red bar representing 100 contracts appears on the LME at the third best bid of $7,278.25. While this second order was active, “five more lots on Franko’s Second Genuine Order were filled” on COMEX. Then, approximately one second after placing it, he cancelled his second “Spoof Order.”[19] The concurrent market activity on COMEX is shown in Figure 3. In particular, the order book on COMEX shows an upward movement of one price level approximately concurrent to the upward movement on the LME. Figure 3 also shows executions that fit the trading pattern described by the CFTC. 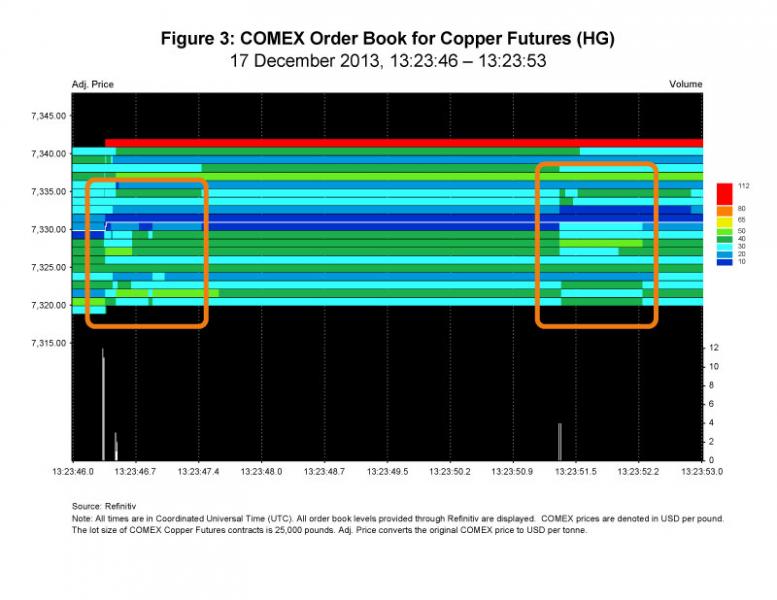 Regulatory surveillance functions and capabilities are evolving to monitor for market abuse risks spanning multiple contracts and products across separate trading venues. While the landscape of cross-market manipulation prosecutions and enforcement actions in the EU, UK, and US is evolving, recent actions taken by regulators signal the commitment to including cross-market manipulation law enforcement in the broader enforcement of general market abuse regulation. In the DaVinci and Franko matters, the traders employed similar trading strategies (entering of allegedly non-bona fide orders in one market to affect genuine orders in another) across multiple, highly-correlated venues and instruments. Thus, these matters provide insights and guidance relevant for evaluating future cross-market manipulation enforcement investigations.

The views expressed in this article are solely those of the authors, who are responsible for the content, and do not necessarily represent the views of Cornerstone Research or any of its clients.

[5] Those defendants were two companies that at the relevant time belonged to the same group headed by Da Vinci Invest Limited (“DVI” and “DVPte”), three traders, and a Seychelles company, Mineworld, which was owned and controlled by the traders and used as a vehicle for derivatives trading on their own account. The Singaporean company DVPte was dissolved and held no assets at the time of the trial. As a consequence, the FCA did not proceed with the case against it. See High Court Judgment

[16] See CFTC Order, p. 3. To identify instances that match the example trading pattern within the relevant period as identified by the CFTC, COMEX and LME data as provided by Refinitiv were screened for the order submission pattern described in the CFTC’s Order.

GameStopped? Regulators react to the “short squeeze”
By
Chris Webber
Transatlantic Trade | US and Europe: May 1 – 15, 2022
By
Stacy A. Swanson
Transatlantic Trade | US and Europe: April 4-15, 2022
By
Stacy A. Swanson
SEC Proposes Landmark Standardized Disclosure Rules on Climate-Related Risks
By
David A. Cifrino, PC
Advertisement