The first project of this kind, the Hy2Tech project (Hy2Tech), was approved, by the Commission on 15 July 2022 and targeted hydrogen-related technologies focused on the end-user in the mobility sector.

The IPCEI Hy2Use addresses projects not covered by Hy2Tech, concentrating on hydrogen-related infrastructure and hydrogen applications in the industrial sector. More specifically, the project covers (a) the construction of hydrogen-related infrastructure, especially large-scale electrolyzers and transport infrastructure, for the production, storage, and transport of renewable and low-carbon hydrogen; and (b) the development of innovative and more sustainable technologies for the integration of hydrogen into the industrial processes of multiple sectors, notably those that are more difficult to decarbonize (e.g., steel, cement, or glass). Thus, IPCEI Hy2Use focuses on decarbonization and its objective is to reduce dependency on natural gas through the increased supply and use of renewable and low-carbon hydrogen.

Under this project, the Commission authorized member states to provide up to €5.2 billion in public funding, aiming to unlock another €7 billion in private investments. As seen in the graphic below, 29 companies with activities in one or more member states will participate in 35 projects. These companies include small and medium-sized enterprises as well as start-ups. The realization of the projects is expected by 2036, with different timelines depending on the function of the project and the companies involved.

IPCEI Hy2Use is the second IPCEI hydrogen-related project approved by the Commission out of the total four expected by the end of 2022. 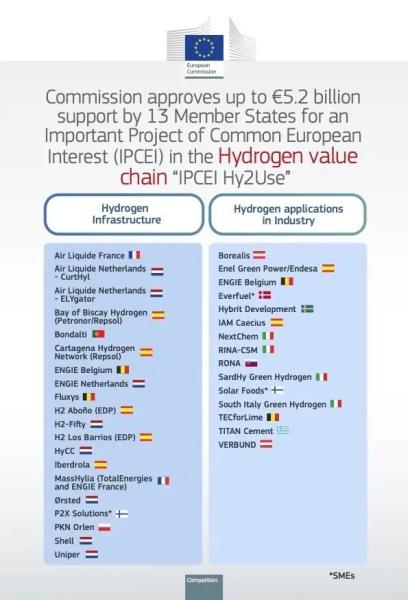 Miguel Caramello Alvarez is a counsel at the firm’s Brussels office. He is a member of the antitrust, competition and trade regulation practice group.

Mélanie Bruneau is a partner in the firm’s Brussels office. She advises on a broad range of areas in European Law. Her practice focuses on advising clients in a variety of industrial sectors, including transport, manufacturing, chemicals and IT, on the legal aspects of their business activities, with a particular emphasis on regulatory compliance.