How Long Does It Take To Negotiate A Union Contract?

Few things sting as much for an employer as losing a union election. If a union wins certification in a secret ballot election conducted by the National Labor Relations Board (NLRB), then a company has a legal obligation to bargain in good faith with the union over a labor agreement that governs virtually all the terms and conditions of employment for the represented workforce. But how long does that process take? Thanks to a recent analysis by Bloomberg Law, we now have a clearer sense of this.

According to Bloomberg’s findings, on average, it takes 409 days between the time a union is certified and the time a collective bargaining agreement is finalized with the employer. This chart from Bloomberg Law illustrates the data: 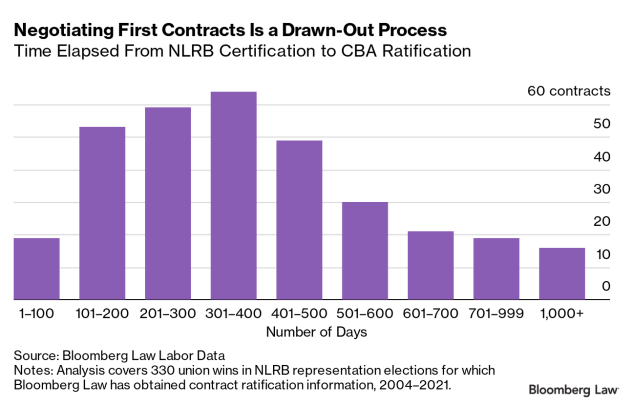 Why does it take so long? For anyone who hasn’t been through the collective bargaining process, negotiations generally entail both sides putting on competing proposals covering the spectrum of labor and employment issues. From wages to benefits to vacations to overtime procedures to job bidding to work rules, there is a lot of ground to cover. In situations where the parties are working towards a first contract, that often means they are building the contract from the ground up and have no foundation to work from.

Bloomberg’s analysis also revealed, however, that there seems to be a disparity on the timeline for first contracts depending on the industry or sector in which the negotiations are occurring: 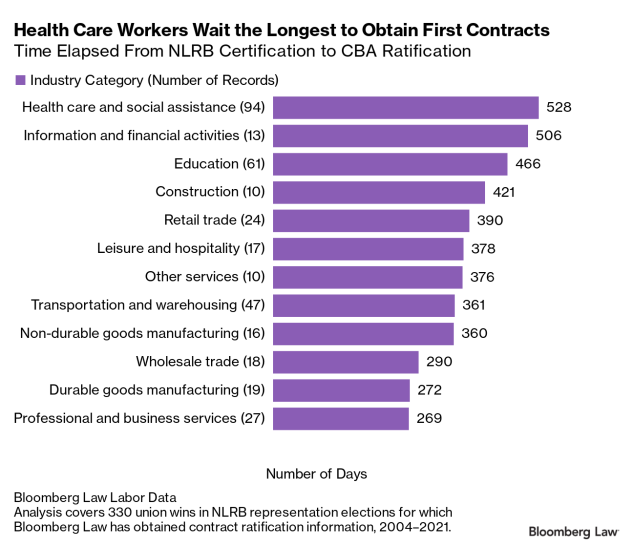 Notably, according to this data, healthcare institutions and their unions take almost twice as long as their manufacturing counterparts to reach an agreement. Various factors may impact this, such as various regulations pertaining to nurses and hospitals as well as limits on strikes in the healthcare sector which are not applicable to other industries.

Another notable item here is that under current labor law, a union enjoys a “certification bar” for up to one year after being certified post-election. That means employees cannot file a decertification petition to oust the union during that time, even if the workers are dissatisfied. Often times when negotiations drag on for more than a year and employees do not perceive they are getting value from their representation, they file a petition with the NLRB to remove the union before a labor contract is finalized. This makes the 409 day average time for a first agreement even more interesting.

Critically, however, the PRO Act would dramatically alter the timing of first contact negotiations. If passed, that proposed legislation would mandate companies and unions to settle first contracts within a few months and then, if no agreement is reached, the parties would have to submit to binding interest arbitration and allow an arbitrator to set the final terms. In other words, the 409 day average almost certainly would drop down to being well below one year.

Regardless of whether the PRO Act becomes law, this is interesting data to consider and review for any organizations getting ready to negotiate a first agreement.

David has helped companies secure favorable outcomes with labor issues around the country. He has experience with numerous labor unions, including the Steelworkers, Teamsters, Laborers, Sheet...