Making Sense Out of the Recent Congressional Study on Bid Protests

As part of the FY2016 National Defense Authorization Act, both houses of Congress commissioned bid protest studies. Congress had questions about the impact of bid protests on agency actions in delaying contracts especially on Department of Defense contracts. On July 21, 2015, the Congressional Research Service (CRS) released its report, GAO Bid Protests: Trends and Analysis.

The CRS Report contains lots of interesting data and useful statistics. But some of the conclusions are a bit suspect. Let’s take a look.

Yes, GAO bid protest filings have risen in recent years. No news there. The CRS Report found that the number of procurements challenged through the GAO bid protest process tripled between 2001 and 2014, from 700 to more than 2,100, with civilian agency protests increasing at a faster rate than DoD agency protests. Here’s the CRS graph: 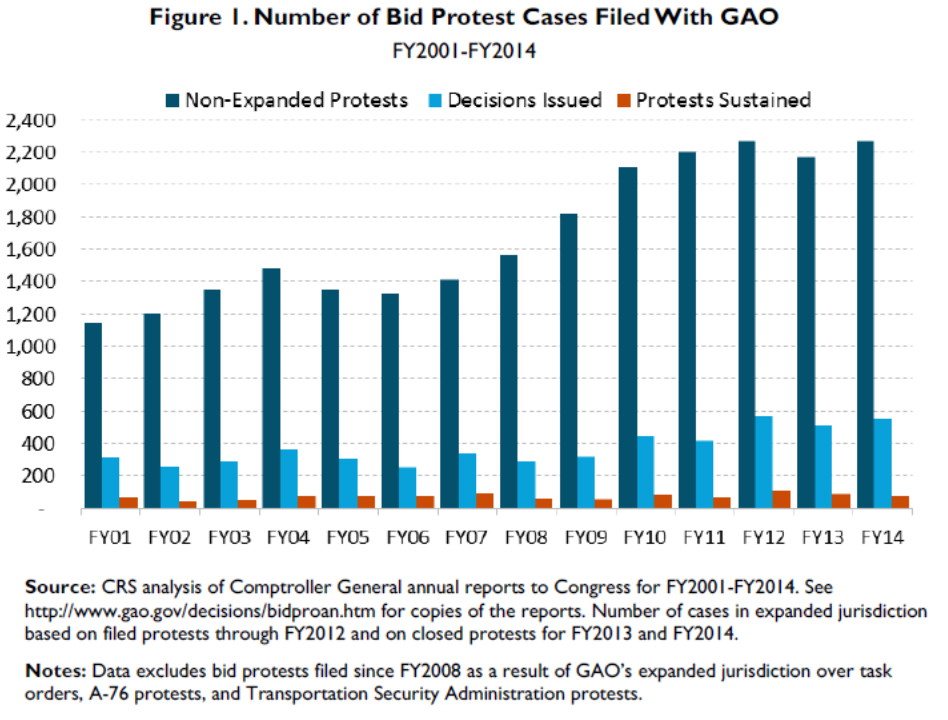 CRS noted that these levels were “not very high by historical standards” and pointed out that from 1986 to 2000, protest filings at GAO averaged more than 2,200 per year.

CRS also looked at the “effectiveness rate.” That’s the percentage of protesters obtaining some form of relief, either through a GAO decision sustaining a protest or by the contracting agency electing to take corrective action in response to the protest, rather than fighting the protest to completion. From 2001 to 2014, the effectiveness rate increased from 33% to 43% but has remained steady over the past five years or so. Here’s the CRS graph: 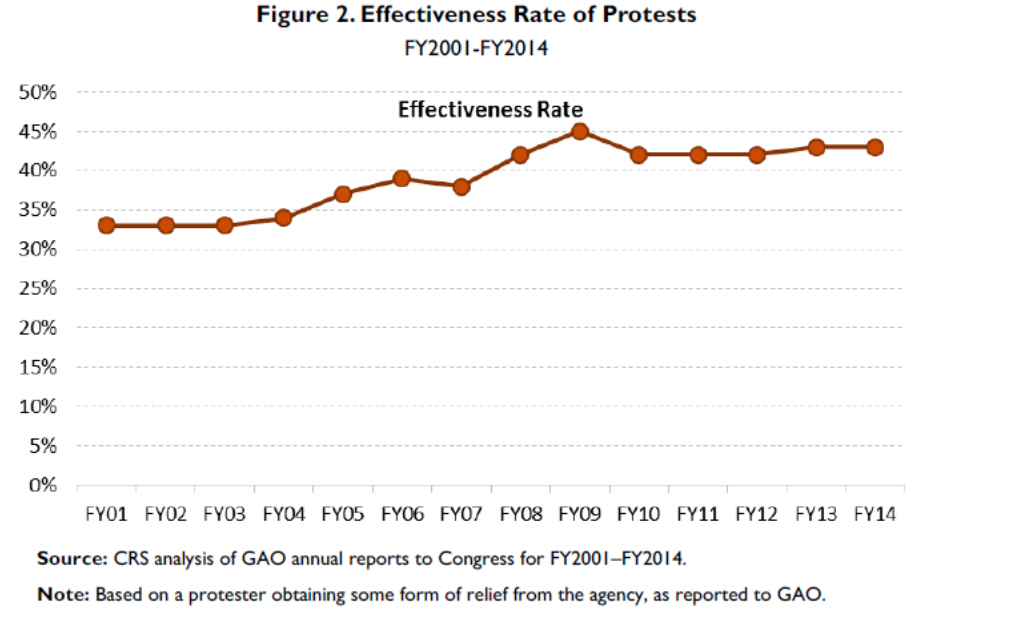 CRS tried to explain why the effectiveness rate for GAO protests is so high. One theory cited by CRS is that agencies usually take corrective action after GAO has indicated that it is going to sustain the protest. But the data uncovered by CRS does not support that theory. GAO told CRS:

Another CRS theory for this high effectiveness rate is the “predictable nature of GAO opinions.” Based upon this theory, CRS concluded that “the effectiveness rate is a rough measure of the number of protests that have actual or potential merit.” That seems about right to us. GAO often (but not always) sustains protests that have merit. Agencies take corrective action where it’s necessary. No controversy there.

CRS looked at the impact of protests on contract awards and implementation. CRS found that in 2014, the average time it took for GAO to resolve a protest was 39 days. CRS also found that more than half of GAO protests were resolved before the agency even filed its report responding to the protest (due 35 days after the protest filing). Those cases were resolved by dismissal or withdrawal of the protest. The average time for those cases was 21 days.

CRS did not look behind those numbers to separate out dismissals for agency corrective action and the GAO’s summary dismissal of protests that are untimely, lacking detail, or that otherwise fall outside GAO’s protest jurisdiction (e.g., contract administration issues). Maybe it should have. Such analysis might have yielded useful results because protests that are summarily dismissed on jurisdictional or procedural grounds are over and done. There is no further impact to the procurement. Protests that are dismissed for agency corrective action will have further impact (and delay) on the procurement. But CRS didn’t undertake that analysis. Instead, CRS took another path.

CRS concluded that agency actions to respond to protest issues (through corrective action or where protests are sustained by GAO) “can delay contract awards for weeks or months, costing millions of dollars and delaying delivery of goods and services.” But CRS cited to only one old (2007) DOD memorandum and one article about a procurement impacted by a GAO decision to support that conclusion. It seems to us that CRS’s conclusion was worthy of more detailed study. Certainly, the important conclusion for consideration by lawmakers – that delays from protests cost agencies millions of dollars – should have been based upon more extensive supporting data.

Yes, bid protests cause delays in procurements. Yes, delays are longer when agencies have to go back and fix errors. But there are some simple conclusions to be drawn from CRS’s statistics, too. CRS showed that 43% of GAO protests had sufficient merit to result in a sustain or an agency determination to undertake voluntary corrective action to rectify identified or potential flaws in the procurement process. . Shouldn’t those procurements be corrected no matter the delay? CRS also showed that 57% of protests lack merit and that more than half of protests are resolved within 21 days. That sure sounds like the delay in a lot of protest cases is limited to 21 days. What are the costs in dollars of a 21 day delay on a procurement? The longer delays and higher costs come from post-protest actions that drag out the process beyond the time the protest is pending. Those delays are not really “caused” by the protest. Rather, they are caused by the contracting agency’s mistakes. That is not just a semantic argument.

Our takeaway from this is that CRS statistics show a procurement and GAO protest system that is working effectively. Concerns over protest-related delays in the government’s ability to acquire necessary products and services is understandable and rational. But don’t forget, agencies already have tools to deal with that. They can override the automatic stay of contract performance triggered by a GAO protest, and should do so when it’s in their best interest, or when their need for the solicited goods or services is urgent.

Mr. Koehl focuses his practice on government contract and financial assistance agreement counseling, negotiations, investigations, and litigation. He has 20 years of experience representing commercial and defense contractors across a broad range of industries, including biodefense, homeland security, and information technology, with an emphasis on matters relating to the federal Multiple Award Schedules (MAS) contract program.

Mr. Lucy has lectured at numerous conferences and seminars in Europe, the Pacific, and the United States. Topics have included...