On November 2, 2012, D.H. Pace Company, Inc. ("Pace") of North Kansas City, Missouri, doing business as the Overhead Door Company of Atlanta, filed a complaint in the Northern District of Georgia against AOD Group, LLC ("AOD") and its principal owner and officer, Garrett Waldrop, both of Lawrenceville, Georgia, alleging breach of contract, breach of the implied covenant of good faith and fair dealing, unfair competition under the Lanham Act, 15 U.S.C. § 1125(a), and unfair and deceptive trade practices under O.C.G.A. §§ 10-1-370 et seq.

According to the complaint, Pace or its predecessor-in-interest have been for the last 75 years the Atlanta-area distributor for Overhead Door Corporation ("ODC"), which manufactures doors and related products and equipment.  ODC, an Indiana corporation with its principal place of business in Lewisville, Texas, owns the federally registered "Red Ribbon Mark" (Reg. No. 1,807,028) shown below.

Pace claims that its distributorship agreement with ODC grants Pace the right to use in metropolitan Atlanta the Red Ribbon Mark and the name "Overhead Door Company of Atlanta."  Pace claims that starting in 2005 AOD began using infringing marks such as the one shown below.

At Pace's request, ODC sent a cease-and-desist letter to AOD, after which AOD modified its logo, an example of which is below. 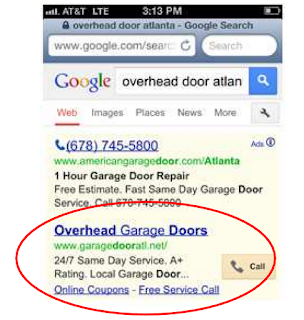 Pace claims that it has contacted AOD on several occasions to provide opportunities to cure the alleged breaches, but Pace represents that AOD has refused to cooperate.  As a result, Pace filed this action and asks the court for a permanent injunction to prevent AOD's continued use of its marks, actual and treble damages, disgorgement of profits, punitive damages, costs, and attorneys' fees.