On July 15, 2014, the Department of Defense (“DoD” or “Department”) issued a proposed rule to amend the Defense Federal Acquisition Regulation Supplement (“DFARS”) in order to improve the efficiency and effectiveness of auditing contractors’ accounting systems, estimating systems, and material management and accounting systems (“MMAS”). The proposed rule contains new requirements addressing third party audits of these three business systems, as well as a requirement for contractors to annually self-report deficiencies uncovered in these audits or in internal reviews of their business systems.

The impetus for the proposed rule appears to be the serious backlog of audits to be performed by the Defense Contract Management Agency (“DCMA”). The preamble to the proposed rule cites to a November 2011 report by the U.S. Government Accountability Office that highlights DCMA’s reliance on the Defense Contract Audit Agency (“DCAA”) “to assist in determining whether a contractor’s business systems are adequate.”  As discussed in the Report, both agencies suffer from high workloads that prevent them from meeting their auditing obligations in the business systems area.

DoD’s proposed solution to this backlog is to outsource some of the auditing responsibilities to third- party Certified Public Accountants (“CPA”) and require contractors to self-report any deficiencies.  As discussed below, this approach could reduce DCAA’s and DCMA’s auditing backlog and address industry concerns that the government is too quick to find significant deficiencies in contractor business systems.  Such a regulatory scheme is, however, not without risks and costs to contractors.

As a result of comments received on the revised proposed rule and this provision in the NDAA, DoD reworked the revised proposed rule and issued an interim rule that allowed DoD to withhold payments to contractors with “significant deficiencies” in their business systems. See 76 Fed. Reg. 28,856 (May 18, 2011). The interim rule, which we addressed in a May 2011 E-Alert, defined a significant deficiency as a shortcoming that has a material effect on the reliability of information produced by the system for contract management purposes. The interim rule was an improvement over the proposed rules introduced in 2010 because it limited withholding to 5 percent per business system and 10 percent per contractor; it added a materiality requirement to the definition of significant deficiency; and it excluded small businesses from coverage.  The interim rule lowered the threshold for coverage from $50 million down to contracts that are “subject to” the Cost Accounting Standards (“CAS”) (under 41 U.S.C. chapter 15).  It also largely retained the previous vague criteria for measuring each individual system’s adequacy.

On February 24, 2012, DoD issued a final DFARS business systems rule. See 77 Fed. Reg. 11,355. Although industry had raised numerous concerns about certain key aspects of the interim rule, DoD made only minor adjustments in the final rule.

The proposed rule issued on July 15, 2014 takes a novel approach to contractor accountability for business systems by “entrust[ing] contractors with the capability to demonstrate compliance with DFARS system criteria for contractors’ accounting systems, estimating systems, and [MMASs], based on contractors’ self-evaluations and audits by independent [CPAs] of their choosing.”  Contractors not only have to pay a third party to conduct an audit, but also must disclose to DoD any significant deficiencies discovered during those audits or during internal reviews. Government auditors and contracting officers then review contractors’ self-evaluations and CPA audits at the contracting officers’ discretion. 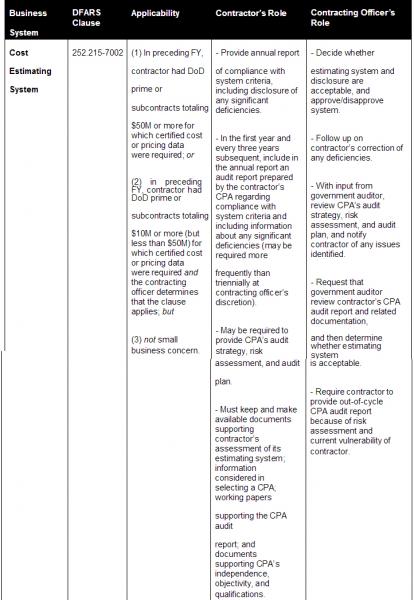 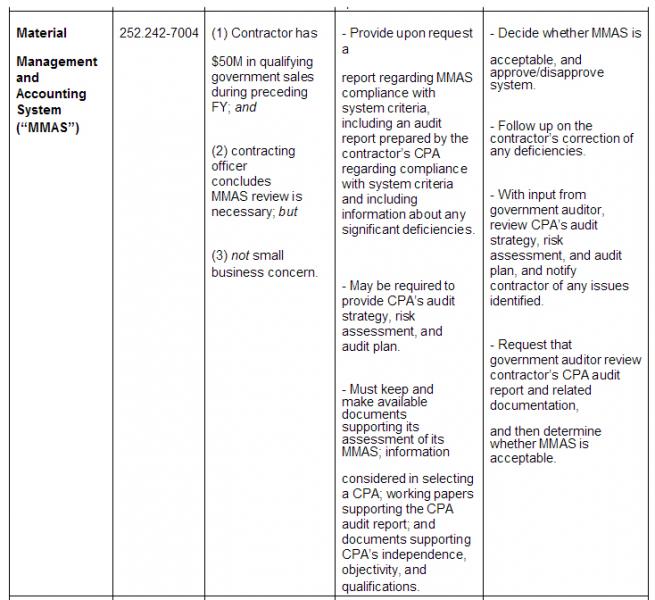 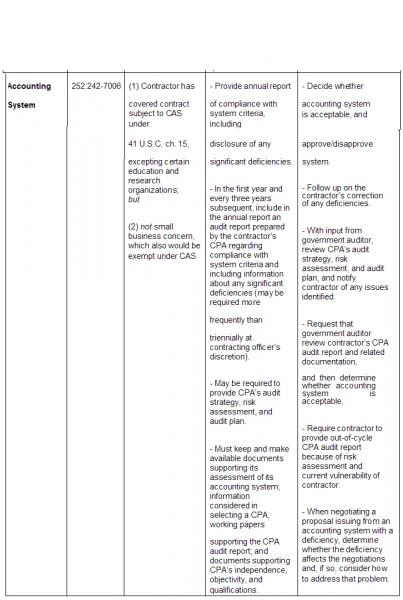 The proposed rule would not impact DCMA’s existing role in reviewing and auditing contractors’ purchasing, property management, and earned value management systems.  It bears noting, however, that payments may be withheld for significant deficiencies under any of the six contractor business systems pursuant to the existing procedures under DFARS 252.242-7005, even though the proposed rule reaches only estimating, MMAS, and accounting.

DoD has solicited written comments in response to the proposed rule, including from small businesses, which must be submitted by September 15, 2014.  In addition, DoD will hold a public meeting for interested parties on August 18, 2014.

Impact of The Proposed Rule

The new proposed rule does not address the ambiguities and risks inherent in the current rules governing business systems compliance, but it does create a new dynamic among contractors, their private auditors, and the government. The proposed rule may allow the government to approve a contractor’s systems more quickly, which would be welcome news for the contractor community.  The backlog of government audits has been an issue for some time, and some contractors may embrace the use of third party auditors if they are waiting for government resolution on a number of fronts.  It is not clear, however, whether this new proposed framework would realize meaningful time efficiencies. Government auditors who review third-party CPA audits may not be inclined to rubber stamp those findings.

Moreover, the required disclosure of deficiencies is troublesome. For one thing, the risk from these types of disclosures is not limited to a potential withholding penalty.  For example, a disclosure of a deficiency in an accounting system could lead the government to seek recovery of overcharges that resulted from those deficiencies or take a harder look at a contractor’s cost or pricing data if the contractor discloses a significant deficiency in its estimating system.  In addition, should an audit uncover information that puts a company at legal risk, the audit will not have been conducted under a privileged review. For example, if a contractor discloses significant deficiencies in its estimating system, this could prompt the government to scrutinize more closely that contractor’s cost or pricing data submissions.  Thus, the disclosure requirement in the proposed rule may be at odds with a contractor’s desire to more fully investigate any issues raised by an audit and could force a quicker resolution to the matter than would be required otherwise under the Federal Acquisition Regulation mandatory disclosure requirement.

Susan Cassidy advises clients on the complex rules and regulations imposed on government contractors, with a special emphasis on the defense and intelligence sectors. She combines a sophisticated knowledge of the FAR and DFARS with the practical insight gained from senior in-house positions at both dedicated defense and commercial item contractors.

Scott Freling divides his practice between working with civilian and defense contractors on traditional government contracts matters and representing buyers and sellers, including a number of private equity firms, in complex M&A deals involving a government contractor.

Mr. Freling represents contractors at all stages of the procurement process and in their dealings with federal, state, and local government customers. In addition, he counsels clients on compliance matters and risk mitigation strategies, including obtaining SAFETY Act liability protection for...

Kayleigh Scalzo represents clients in a broad array of high- stakes litigation matters with the government and other private parties. She litigates bid protests at the Government Accountability Office, Court of Federal Claims, state courts, and before federal and state agencies. Ms. Scalzo also litigates Administrative Procedure Act cases and other civil matters in the U.S. Courts of Appeals and U.S. District Courts.

Kayleigh Scalzo represents clients in a broad array of high- stakes litigation matters with the government and other private parties. She litigates...