The U.S. Securities and Exchange Commission filed fewer enforcement actions against public companies and subsidiaries in fiscal year 2021, the lowest total in seven years. A report released today by the NYU Pollack Center for Law & Business and Cornerstone Research notes enforcement actions slowed as FY 2021 saw the continuing impact of the COVID-19 pandemic and transition to a new SEC Chair.

The report, SEC Enforcement Activity: Public Companies and Subsidiaries—Fiscal Year 2021 Update, analyzes data from the Securities Enforcement Empirical Database (SEED). The SEC filed 53 new actions against public companies and subsidiaries in FY 2021, which ended September 30. The FY 2021 total was down 15% from 62 actions the previous fiscal year and a steep drop from a record-high 95 actions in FY 2019.

While the SEC has indicated that the number of total enforcement actions increased in FY 2021, we saw a decline in the number of actions against public companies and subsidiaries.

“We have seen declines in filing activity after a change of administration in the past. The decrease in actions from FY 2020 to FY 2021, when Gary Gensler took over as the SEC’s Chair, is consistent with the trends seen in 2013 and 2017, other years in which a new SEC Chair was sworn in,” said report coauthor Sara Gilley, a Cornerstone Research vice president. “While the SEC has indicated that the number of total enforcement actions increased in FY 2021, we saw a decline in the number of actions against public companies and subsidiaries.” 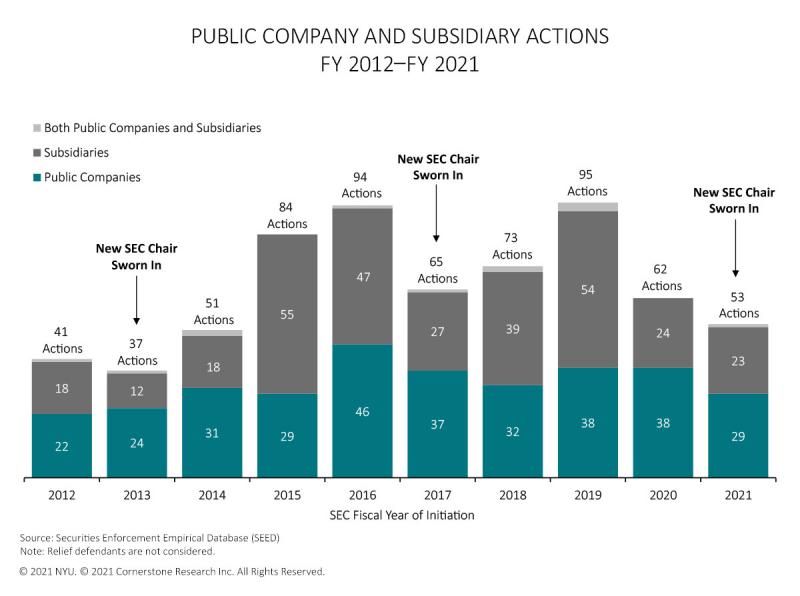 “For the first time in 10 years, no public company or subsidiary defendants admitted guilt in FY 2021,” said report coauthor Stephen Choi, the Bernard Petrie Professor of Law and Business at New York University School of Law and director of the Pollack Center for Law & Business. “It will be interesting to see if this trend changes, as the SEC recently announced a policy to seek admissions in certain cases as a way to improve the deterrent value of enforcement actions.”

More than half (51%) of actions against public company and subsidiary defendants in FY 2021 involved issuer reporting and disclosure allegations, which has been the most frequent allegation type in eight of the last 10 fiscal years. FY 2021 was the first fiscal year in which more than half of the SEC’s enforcement actions were of the same allegation type.

About the NYU Pollack Center for Law & Business

Established in 1997, the NYU Pollack Center for Law & Business is a joint venture of the NYU School of Law and the Stern School of Business. Its mission is to enrich the teaching curriculum at both schools in areas where law and business intersect; to facilitate professional interaction and academic research by faculty who share an interest in the structure, regulation, and function of the market economy; and to contribute to the public welfare by supporting scholarship that assists governmental and private policymakers in their pursuit of enhanced business productivity.

Following Record-Setting Year, SEC Opens 2022 With $4 Million in New Whistleblower Awards: Is Your D&O Policy Prepared to Respond?
By
Geoffrey B. Fehling
SEC Proposes Swing Pricing for Institutional Money Market Funds
By
Michael D. Davalla
Financial Services Industry Year in Review: Regulatory Enforcement and Litigation Trends in 2021 and Beyond
By
Christian T. Kemnitz
Does Anybody Really Know When Form SR Will Be Due? Does Anybody Really Care (Care About Time)?
By
Keith Paul Bishop
Advertisement

Sara Gilley specializes in securities and white-collar litigation. She consults on economic and financial issues related to federal class actions, corporate investigations, and government enforcement activity. Ms. Gilley also has experience in matters brought under international securities laws. She works with clients in all phases of litigation, including motion to dismiss, class certification, merits, and testimony.

Ms. Gilley manages the firm’s research related to enforcement actions by the Securities and Exchange Commission (SEC), and...

In securities cases, Ms. Lazur has addressed class certification, market efficiency, loss causation, and damages. Ms. Lazur also has experience valuing companies, products, and lost profits. The matters she has worked on have...