Three Type of U.S. Patents and When to Use Them

Have you heard of a “design” patent?  Maybe someone you know mentioned this as a less expensive alternative to a “regular” U.S. patent. The U.S. patent laws actually define three basic types of patents:  utility patents, design patents, and plant patents.

Utility patents are by far the most common type of patent. To date, over 11 million have been issued by the U.S. Patent and Trademark Office (USPTO). Utility patents are for utilitarian inventions such as machines, processes, compositions of matter, and articles of manufacture. A utility patent has a written description section and a claims section. Most utility patents also include drawings or figures, but in some cases the invention can be adequately described without any drawings. At least one claim must be present, but usually there are many more, e.g. 10 or 20 or more. There is no upper limit to the number of claims allowed, but the USPTO charges extra fees when a patent application contains more than 20. After the patent issues, the USPTO charges maintenance fees to keep the patent in force for its full lifetime. If the patent owner fails to pay the required maintenance fee at approximately 4, 8, and 12 years from issuance, the patent will prematurely lapse.

Over 900,000 design patents have been issued by the USPTO. A design patent protects the ornamental appearance of a thing rather than its utilitarian function.  Protection is defined by the appearance of the design as shown by the drawings, which are thus required in a design patent. The description is typically limited to a title of what the design pertains to, such as “bottle” or “electronic device,” and very little additional description. In modern practice, only one claim is allowed, with standardized wording referring to the design “as shown and described”, or the like. Figures are shown below for the well-known Coke bottle design and an early version of Apple’s iPhone. 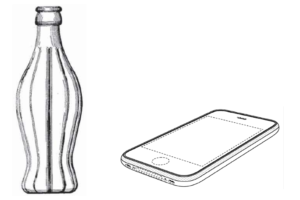 There is evidence that product design, i.e. the appearance or look of a product as distinguished from its function, is becoming important to American manufacturers. One need only cite the substantial efforts of Big Tech companies to design products that are not only functional but also aesthetically pleasing in order to gain greater market share and customer loyalty. In that regard, if your company makes products whose aesthetic appearance is a marketing consideration, you may want to consider whether your next new product has any novel design features that are worthy of design patent protection.

Over 30,000 plant patents have been issued to date. This type of patent protects new and distinct varieties of asexually reproduced plants. The patent typically includes drawings of the plant and a description of its characteristics. The term for a plant patent is the same as a utility patent, 20 years from the filing date, but no maintenance fees are required. Also like utility patents, applications for plant patents are published at 18 months from the earliest filing date, unless the application has already issued as a patent.

The following table summarizes different aspects of the three types of U.S. patents.

The filing fees given in the table are those currently charged by the USPTO to large entities, e.g., medium- to large-sized businesses, for a standard patent application of the given type.

Stephen is a member of Davis|Kuelthau’s Intellectual Property team in the Appleton Office. He has extensive IP experience, including: patent preparation; U.S. and worldwide patent prosecution, infringement, non-infringement, and product clearance analyses and opinions; client counseling; and litigation support, including discovery, motion practice, and participation in court-ordered mediation. He is also experienced with U.S. and worldwide trademark application practice and prosecution, as well as non-disclosure agreements, licensing agreements, and development...