This week, the U.S. Citizenship and Immigration Services (USCIS) released a new version of its Form I-9, the Employment Eligibility Verification form. All U.S. employers must begin using the new Form I-9 after January 22, 2017.

Currently, U.S. Immigration and Customs Enforcement conducts over 3,000 I-9 employer audits annually, and immigration enforcement is anticipated to increase due to the Trump presidency. In January, Holland & Hart will host a webinar explaining the changes to the Form I-9 and discussing what immigration reforms employers should expect in a Trump presidency.

The new version of the Form I-9 includes some clarifications as well as some changes designed to make the form easier to fill out electronically. Completing the Form I-9 electronically will require downloading the latest version of Adobe Reader. Form I-9s completed electronically will still need to be printed and signed by the employee and employer agent by hand. One of the changes is in Section 1 which now asks for “other last names used” rather than “other names used.”

Enhancements for easier completion of the form include drop-down lists and calendars for entering dates, the addition of prompts to help ensure that information is entered properly, on-screen instructions for each field, and easy access to the full instructions. It also includes an option to clear the form and start over. Other changes you’ll find on the new I-9 include:

Reminder of I-9 Process

As you may know, the 1986 Immigration Reform and Control Act (IRCA), prohibits employers from hiring employees, including U.S. citizens, without first verifying their identity and checking that they have proper authorization to work in the United States. The Form I-9 ensures that you have completed this necessary verification for all new hires. USCIS provides the following useful graphic to show the proper timing and process for completing Form I-9s for each newly hired employee: 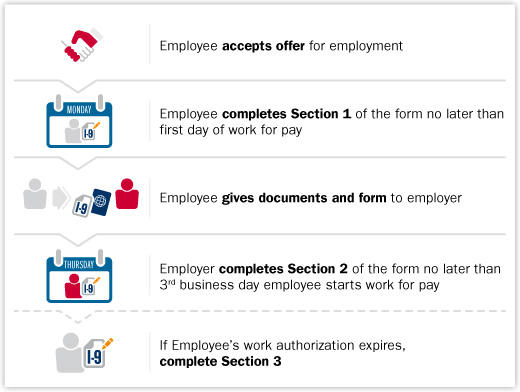 What You Need To Do

You have just over two months to switch to the new Form I-9, so it is best to put procedures in place now to make that switch for all new hires to ensure compliance.

Companies large and small frequently engage Mr. Tsai to provide counsel on a broad spectrum of employment and immigration issues. With extensive experience and a national reputation for being at the forefront of change in immigration law, Mr. Tsai is able to find positive solutions to his clients' varied needs.

Mr. Tsai counsels universities and companies in the healthcare, technology, and energy sectors on securing temporary and permanent visas for foreign national employees, including H-1B visas and permanent resident status. He also represents companies under investigation by the...