In 2016 and 2017, two storied college football programs - the Ohio State Buckeyes and the University of Oklahoma Sooners - battled it out on the football field.  While Ohio State was victorious in 2016, Oklahoma evened things up with a victory in Columbus in 2017. In 2018, these two universities will battle it out again, but this time not on the football field, but rather before the Trademark Trial and Appeal Board.

The Ohio State University owns various registrations for a “Block O” mark.  One of the registered marks appears below: 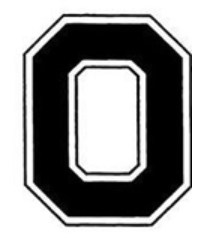 The University of Oklahoma has applied to register a design mark consisting of a drum major with a block O across the chest of the drum major’s shirt, for use in connection with live performance by a musical band. Oklahoma claims to have used the mark since 2001.  Oklahoma’s mark appears below:

Ohio State claims that it has used its “Block O” mark since at least as early as 1898 and alleges:

“Today, the Block O mark is the heart of the branding and image of Ohio State and is used in connection with all products and services offered and provided by Ohio State, including educational, athletic, recreational, and musical. Indeed, the Block O Mark is permanently displayed in the middle of the football field at Ohio Stadium where millions of viewers have seen in Ohio State Buckeyes football team play its home games and have cheered on Ohio State’s marching band as it performs its famous ‘Script Ohio.’”

Further, Ohio State alleges that the “Block O” mark as it appears across the chest of the shirt of the drum major in the “Drum Major” mark is the dominant portion of the “Drum Major” mark, and consumers will naturally gravitate to the lettering on the chest to identify and falsely believe that there is a connection to Ohio State. Moreover, Ohio State notes that the actual uniform currently worn by Oklahoma’s drum majors is inconsistent with the use of the “Block O” appearing on the applied-for mark, such that the likelihood for confusion as to source is exacerbated.

Oklahoma has until October 8, 2018 to respond to the opposition.

This is not the first time Ohio State has tangled with an Oklahoma university regarding trademarks. Last year, Ohio State and Oklahoma State University, after trading legal blows, came to an agreement with regards to their respective “OSU” trademarks. Both schools agreed not to promote, market, license or sell products or services in a way that would cause confusion.  Notably, both schools also agreed not to use their marks to disparage the other. An example from the parties’ agreement states that Oklahoma State will not make T-shirts calling Ohio State a “wannabe OSU,” and Ohio State will not produce T-shirts dubbing Oklahoma State a “copy-cat OSU.”

He has acted as outside counsel for a broad range of clients, from individuals, to small businesses, to startups, to Fortune 500 corporations.  In practice, clients look to him not only for his handling of tactical matters such as patent applications, but his ability to strategically think forward about the challenges coming their way.

Sungwook (Sung) Lee has experience in various aspects of patent practice including patent application preparation, patent prosecution and patent litigation. His practice focuses on mechanical and electro-mechanical structures such as automotive components, power systems, semiconductors and office products including copier and printer.

Prior to joining Brinks, Sung was at Viering, Jentschura & Partner in Germany as a U.S. patent attorney and worked with the European patent system in addition to United States patent system. With the knowledge and experience of...